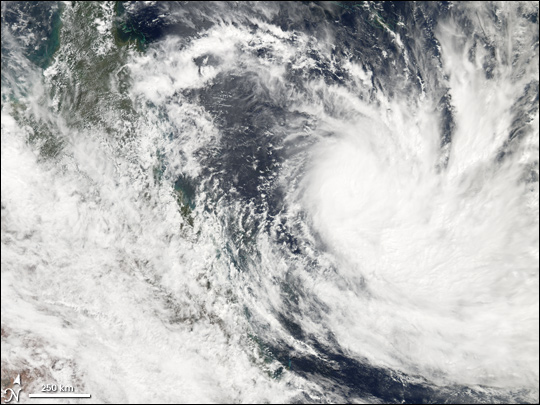 Tropical Cyclone Wati formed northeast of New Caledonia on March 19, 2006. The cyclone gained power gradually and had been heading towards the coast of Australia along a track similar to the very destructive Cyclone Larry, which came ashore in Queensland at the same time Wati was building power. However, forecasts as of March 22 projected that while Wati would continue to gain strength, it would turn sharply south and east, staying well away from the Australian mainland and New Calendonia.

When the Moderate Resolution Imaging Spectroradiometer (MODIS) on the Aqua satellite observed the storm at 3:05 p.m. Australian Eastern Daylight Savings Time (04:05 UTC) on March 21, 2006, Tropical Cyclone Wati was continuing to slowly build power and size. When MODIS made this observation, the storm had peak winds of around 150 kilometers per hour (90 miles per hour), and forecasts at the time called for it to continue to gather power for at least another day. It was predicted to slowly weaken as it headed south and traveled over cooler water. In this image, the scattered and unorganized remnants of Tropical Cyclone Larry can still be seen over Queensland, well east of Cyclone Wati.