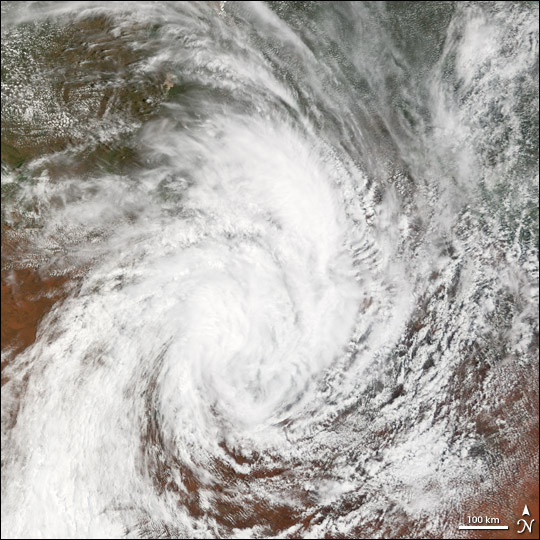 A persistent low-pressure system sat over Australia’s “Red Center” for several days at the end of January and into February 2006, bringing rain to a landscape better known for its dry conditions and parched starkness. Storms are normal phenomena, however, in the Australian monsoon season (locally known as “The Wet”). The Australian Bureau of Meteorology reported moderate rain falling through most of the area, with occasional heavy rains of 20-40 millimeters (1-2 inches). While this amount is not an impressive-sounding quantity, sustained over several days, it amounted to considerable rain totals, and streambeds that are typically completely dry filled and overflowed, causing flooding in many areas.

The satellite image shows the swirling clouds associataed with the low-pressure system. This image was acquired by the Moderate Resolution Imaging Spectroradiometer (MODIS) on the Terra satellite on February 1, 2006, at 01:50 UTC (10:50 a.m. local time). In the southern hemisphere, low-pressure systems develop spiral patterns that wind clockwise around the center of the system because of the rotation of the Earth. (Low-pressure systems spin counter-clockwise in the Northern Hemisphere). This particular system was being fed moisture from the Indian Ocean, where warm seas evaporate water into the air. The moist air was then carried along in a low-pressure frontal system. Called a “monsoon trough,” such systems typically bring intense rains of themselves. When the monsoon trough combines with low-pressure systems such as the one pictured here, heavy monsoon rains fall in northern Australia.

Low Pressure System in the Gulf of Alaska

The MODIS instrument aboard NASA’s Aqua satellite captured this true-color image of a large low pressure system spinning in the Gulf of Alaska on August 17, 2004 at 22:45 UTC. This area of the world is famous for strong, persisent low pressure systems because of the persistent flow of semi-permanent pressure systems north (the polar easterlies) and south (the subtropical high) of the area.