Fires in Sudan and Neighboring Countries 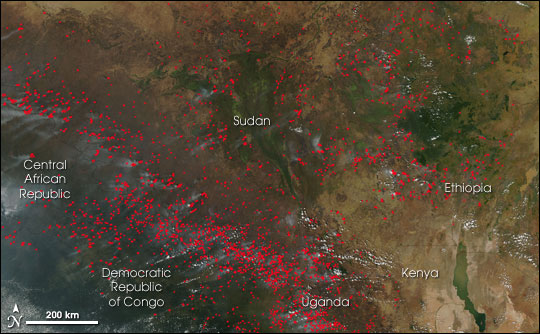 Hundreds of fires were burning in eastern Africa south of the Sahara Desert in mid-December 2005. The Moderate Resolution Imaging Spectroradiometer (MODIS) on NASA’s Aqua satellite captured this image centered on southern Sudan on December 15, and locations where the sensor detected actively burning fires are marked in red. The fires are most abundant along the border of Sudan with the Central African Republic and Democratic Republic of Congo. Most of these fires have probably been set by people intentionally for agricultural purposes. Though it is not necessarily immediately hazardous, such large-scale burning can have a strong impact on weather, climate, human health, and natural resources. 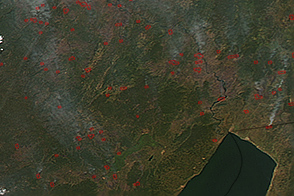