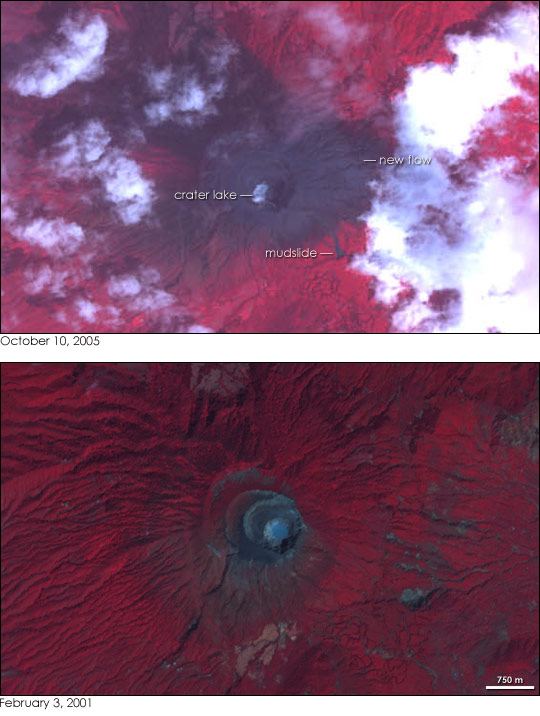 Between October 5 and October 11, 2005, the Santa Ana (Ilamatepec) Volcano produced a series of eruptions consisting of small explosions, gas emissions, and low or moderate seismic activity. Local weather conditions prevented researchers from making ground- or satellite-based inspections of the volcano. An aerial inspection on October 11, however, showed no changes in the volcano’s crater.

These false-color images were made from data collected by the Advanced Spaceborne Thermal Emission and Reflection Radiometer (ASTER) on NASA’s Terra satellite. The top image shows Santa Ana during its eruptive period in early October 2005, with features not visible in the earlier image: a new lava flow, and a mudslide. The blue-green crater lake in the center of the volcano is noticably smaller. News reports from early October 2005 discussed a flood of boiling mud and water, and molten rocks, some the size of small automobiles.

Historical eruptions of Santa Ana include small-to-moderate explosive eruptions. The volcano’s prehistoric activity was more dramatic; collapse during the late Pleistocene or early Holocene caused an avalanche of debris that stormed all the way into the Pacific and formed the Acajutla Peninsula.

After the eruption of October 5-11, 2005, the Servicio Nacional de Estudios Territoriales (SNET) warned that Santa Ana’s burst of activity might not be over. Authorities maintained a red alert (the highest level) for a 5-kilometer radius around Santa Ana’s central crater.

NASA image by Jesse Allen based on data provided by Timothy Gubbels and Asad Ullah, SSAI, and the NASA/GSFC/METI/ERSDAC/JAROS, and U.S./Japan ASTER Science Team

On October 1, 2005, the Santa Ana (also known as the Ilamatepec) Volcano erupted, producing car-sized lava rocks, a boiling flood of mud and water, and a cloud of sulfur dioxide.