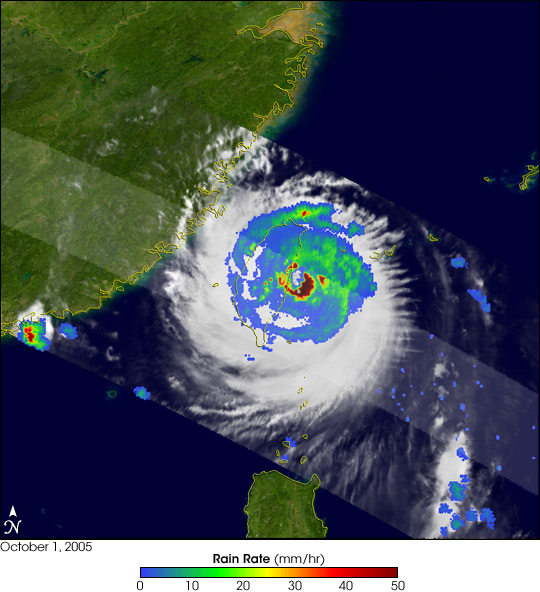 Typhoon Longwang, which means “dragon king” in Mandarin, became the third super typhoon this year to hit Taiwan and continue on to make landfall in China. The other two super typhoons of 2005 were Haitang and Talim. After traversing the Philippine Sea, Longwang plowed over Taiwan on October 2, 2005, where winds were recorded up to 230 kilometers per hour (143 mph). The storm left one person missing and one dead in Taiwan. Longwang then continued moving across the Taiwan straight and struck Fujian Province in southeast China. Three people were reported killed, and 59 police cadets were missing after flood waters swept away their buildings.

This image of Longwang was captured by the Tropical Rainfall Measuring Mission (TRMM) satellite on October 1, 2005, at 20:27 UTC, just as the center of the storm was making landfall on the eastern coast of Taiwan. The western half of the eyewall is already over the coast while the center sits just offshore. A sizeable area of very intense rain (dark red area) is present in the eastern half of the eyewall. At the time, Longwang was still a Category 4 typhoon with sustained winds of 115 knots (132 mph). After crossing Taiwan, the storm would later weaken to a Category 1 typhoon before hitting mainland China.

The TRMM satellite has been measuring rainfall over the tropics since its launch in 1997. The TRMM-based, near-real time MPA at the NASA Goddard Space Flight Center provides estimates of rainfall over the global tropics.

Typhoon Longwang formed in the northeastern Pacific Ocean near the Mariana Islands in late September 2005. It gathered strength as it moved west, eventually striking Taiwan and China.