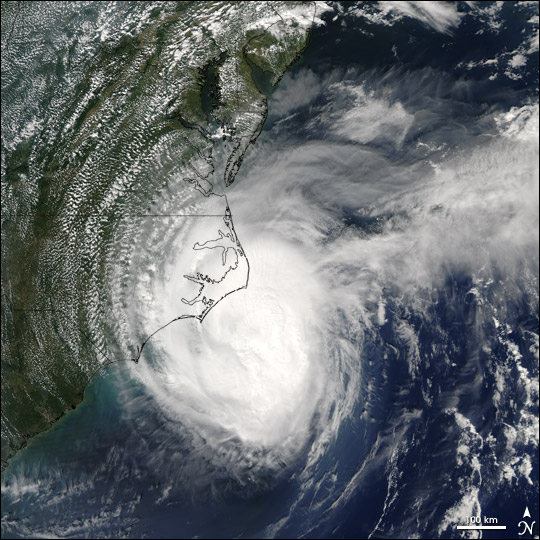 Over the last several days, Ophelia has meandered off of the southeast coast of the United States. The storm system, which began as a depression over the Bahamas on September 6, 2005, has twice stalled out and made loops: once just east of Cape Canveral, Florida, and the other farther out to sea east of Georgia. Ophelia has also flip-flopped several times between a strong tropical storm and a weak Category 1 hurricane. Despite its very slow movement, which usually leads to weakening due to upwelling of cooler water, Ophelia has maintained itself as a result of warm waters an its proximity to the Gulf Stream.

The hurricane was grazing along the North Carolina coastline without making landfall when the Moderate Resolution Imaging Spectroradiometer (MODIS) on NASA’s Aqua satellite captured this image at 2:20 p.m. Eastern time on September 15, 2005. At the time, Ophelia had winds of 120 kilometers per hour (75 miles per hour), easing off slightly from its latest peak and heading back down yet again to tropical storm status. The slow-moving storm was initially forecasted to dump heavy rain on the Outer Banks of North Carolina, but proved less destructive than feared. One death (due to a car accident in Raleigh attributed to slick roads) has been attributed to the storm, but fears of substantial flooding have largely not been realized.