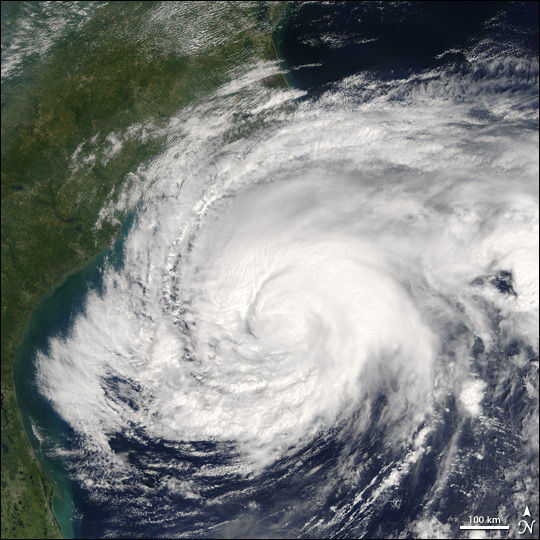 Ophelia was once again a hurricane when the Moderate Resolution Imaging Spectroradiometer (MODIS) on NASA’s Terra satellite captured this image at 11:35 a.m. local time, on September 11, 2005. A Category 1 hurricane, Ophelia had sustained winds of 110 kilometers per hour (70 miles per hour).

Tropical Storm Ophelia formed off the Atlantic Coast of Florida. As it gathered strength and size, it brought winds and rain to parts of the Florida coast, though the storm’s center remained offshore. By September 8, Ophelia briefly reached hurricane strength, but it soon weakened again. Over the following two days, the center of the storm system moved eastwards off the Florida coast and began a gradual track north and east, paralleling the U.S. coastline. As Ophelia moved, the storm again rebuilt into a Category 1 hurricane.

It is unusual for a storm system to build just offshore in this fashion, especially as having rain bands over land tends to break up the storm formation. It is also unusual to have so many storms in such a short time: the 2005 Atlantic hurricane season looks likely to go into the record books as the most active season on record yet. Ophelia is the earliest “O” named storm in a season since the storm naming system was devised.

The large image provided above has a spatial resolution of 250 meters per pixel. It is available in additional resolutions from the MODIS Rapid Response Team.