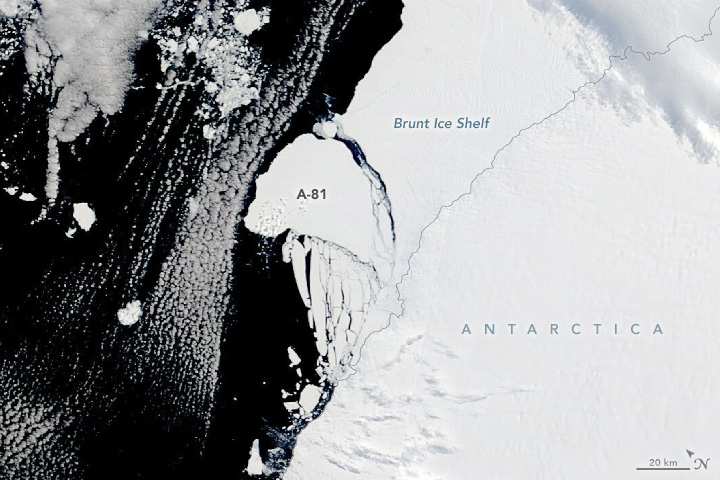 In February 2019, a rift spanning most of the Brunt Ice Shelf in Antarctica appeared ready to spawn an iceberg about twice the size of New York City. The question among scientists was not if the growing rift would finish traversing the shelf and break, but when? Now, nearly four years later, it has done just that.

According to the British Antarctic Survey (BAS), the break occurred late on January 22, 2023, and produced a new iceberg with an area of 1550 square kilometers (about 600 square miles). The U.S. National Ice Center has named it Iceberg A-81. The berg is visible in this image, acquired on January 24, 2023, with the Moderate Resolution Imaging Spectroradiometer (MODIS) on NASA’s Terra satellite.

The glacial ice in the shelf flows away from the interior of Antarctica and floats on the eastern Weddell Sea. (For reference, the Antarctic Peninsula and its ice shelves are located on the opposite side of the Weddell.) The shelf has long been home to the British Antarctic Survey’s Halley Research Station, where scientists study Earth, atmospheric, and space weather processes. BAS reported that the station, which was relocated farther inland in 2016 as the chasm widened, was unaffected by the recent break. 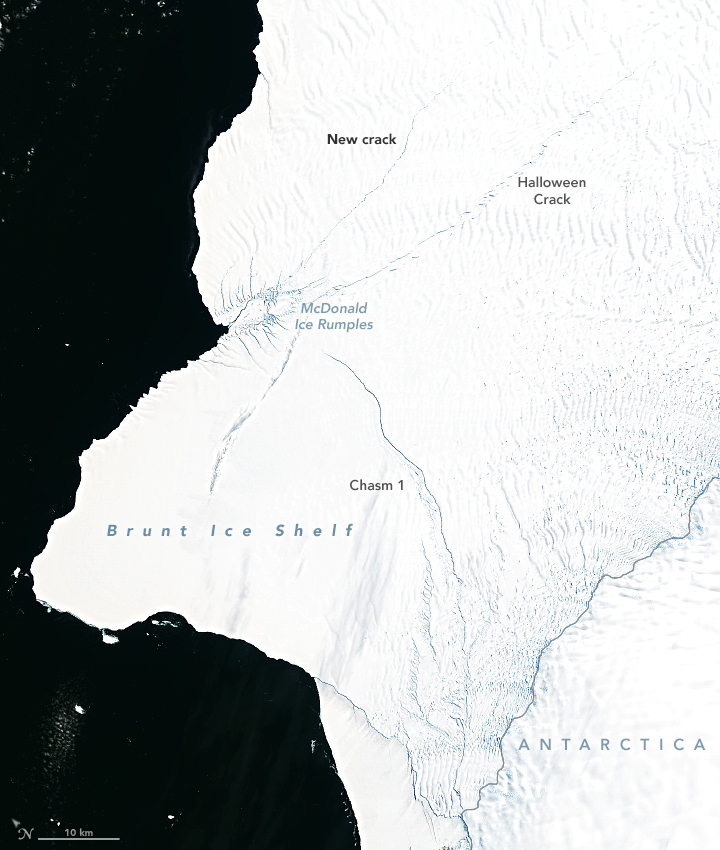 The break occurred along a rift known as Chasm 1. This chasm started growing in the 1970s, followed by a period of dormancy, and then resumed growth in 2012. It continued to lengthen for almost a decade, extending by as much as 4 kilometers (2.5 miles) per year in early 2019. But even this growth spurt slowed. That is, until the 2022–2023 Antarctic summer when the chasm sped up and ultimately broke past the McDonald Ice Rumples—a submerged knob of bedrock that served as a pinning point for this part of the shelf. Several factors may have contributed to the completion of the break, including a lack of sea ice to help resist, or “push back,” against the stresses on the shelf ice in 2023.

The second image, acquired with the Operational Land Imager (OLI) on Landsat 8, shows the extent of Chasm 1 on January 12, 2021, about two years prior to the break. Notice several other cracks across the northeast part of the shelf. The “new crack” in that image ultimately separated in February 2021 and formed Iceberg A-74.

“The rapid formation of subsequent rifts—to long-standing Chasm 1 and 2—and recent calving to the northeast makes it clear that these shelf areas are dynamic with poorly understood stresses,” said Christopher Shuman, a University of Maryland, Baltimore County, glaciologist based at NASA’s Goddard Space Flight Center.

The breaking (calving) of icebergs from ice shelves is part of a natural, cyclical process of growth and decay at the limits of Earth’s ice sheets. As glacial ice flows from land and spreads out over the sea, shelf areas farthest from shore grow thinner. These areas are stressed by storms and tides and thin as they are melted from above or below, ultimately making them more prone to forming rifts and breaking away.

As for the “new” Brunt, it remains to be seen how the complex floating glacial ice responds to the most recent calving event. According to Shuman: “We have no solid idea what ‘normal’ really is for this unusual ice shelf.”

A long-watched rift has spawned an iceberg about twice the size of New York City. 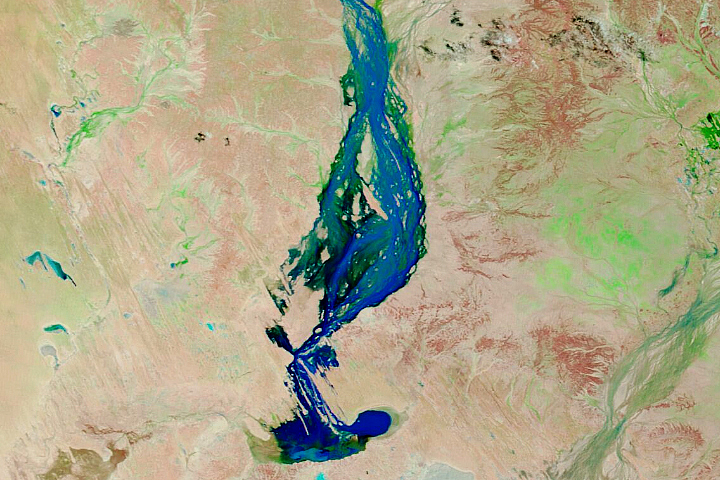 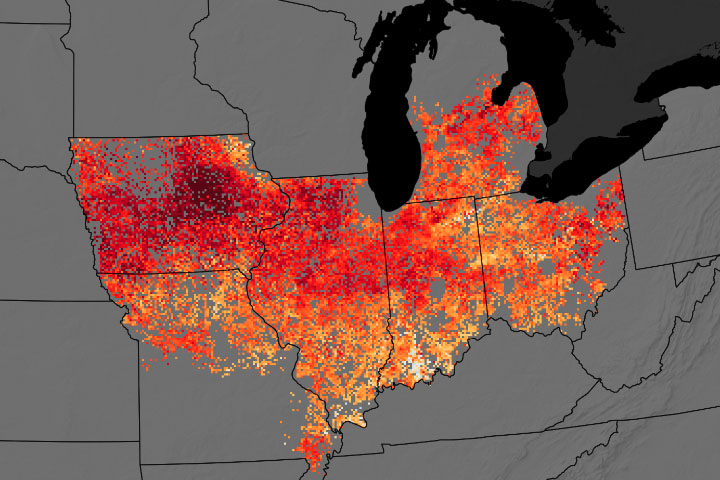 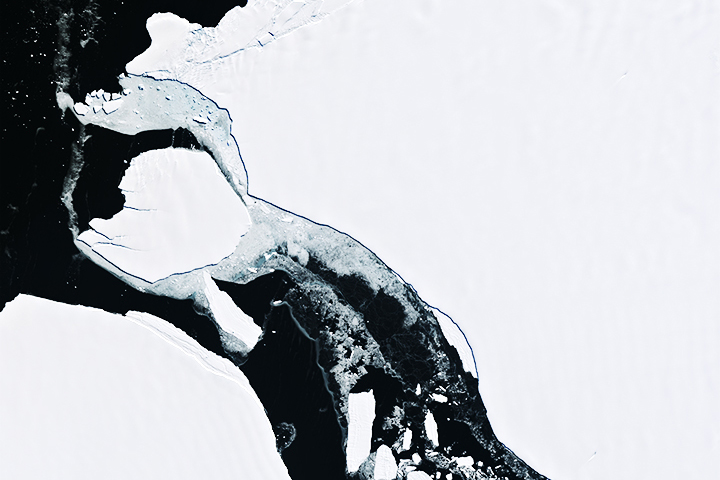 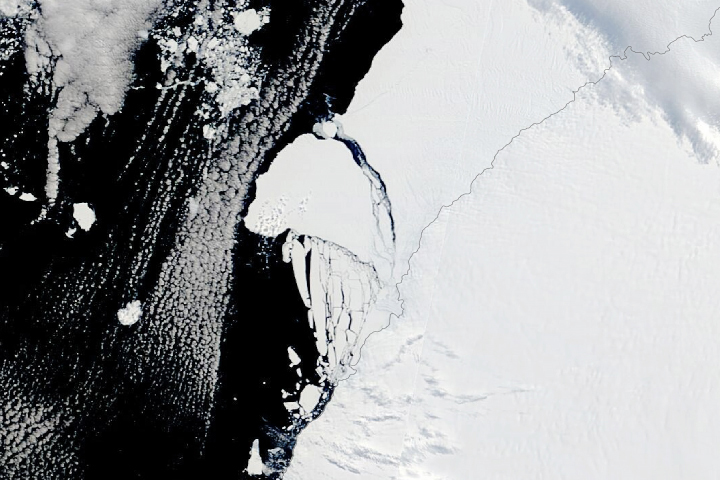