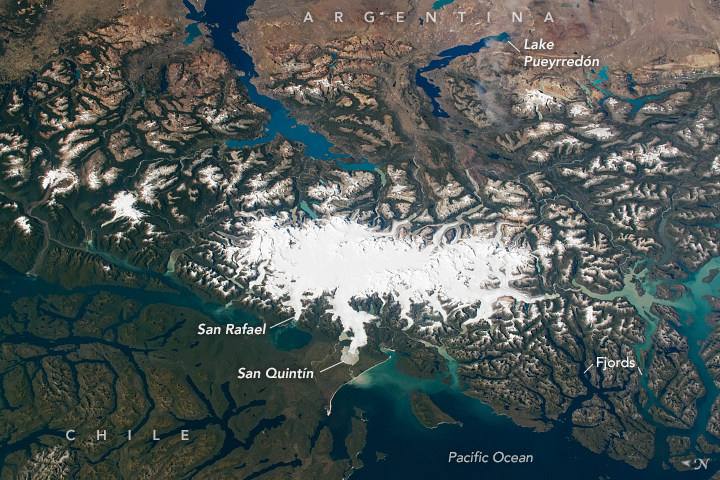 An astronaut on the International Space Station took this photograph of the southern Andes Mountains. The mountain peaks here reach high enough and temperatures remain cold enough year-round that permanent ice persists today. The brilliant white Northern Patagonian Icefield is the smaller of two icefields (the other being the Southern Patagonian) that are often observed from space by astronauts.

The icefield was significantly larger about 18,000 years ago, during the coldest phase of the last Ice Age. It covered almost the entire view in this image—an enormous area considering that the present icefield is more than 100 kilometers (60 miles) long.

Glacial ice moves slowly downhill under its own weight. As it flows, it cuts valleys into the underlying rocks. There have been several ice ages in the past, and scientists now know that the lakes at the top of this image and the network of valleys (fjords) at the bottom were gouged out by the erosion of moving glacial ice when the icefields were much larger.

Two of the biggest glaciers flowing off the icefield, San Rafael and San Quintín, are prominent features on the Pacific side of the icefield. (Note that north is to the left in this photo.) Both have been melting faster than the ice has been supplied from upstream. The retreat of the snout of San Quintín has been documented in previous detailed photos taken by astronauts.

In a recently published survey of glaciers, scientists showed that the Patagonian icefields follow the global trend of ice melting and loss. Ice losses here have occurred because air temperatures have been increasing along the length of the Andes, even while there has been a small increase in precipitation (snow) that feeds the glaciers.

Astronaut photograph ISS064-E-44411 was acquired on March 17, 2021, with a Nikon D5 digital camera using a focal length of 78 millimeters. It is provided by the ISS Crew Earth Observations Facility and the Earth Science and Remote Sensing Unit, Johnson Space Center. The image was taken by a member of the Expedition 64 crew. The image has been cropped and enhanced to improve contrast, and lens artifacts have been removed. The International Space Station Program supports the laboratory as part of the ISS National Lab to help astronauts take pictures of Earth that will be of the greatest value to scientists and the public, and to make those images freely available on the Internet. Additional images taken by astronauts and cosmonauts can be viewed at the NASA/JSC Gateway to Astronaut Photography of Earth. Caption by Justin Wilkinson, Texas State University, JETS Contract at NASA-JSC. 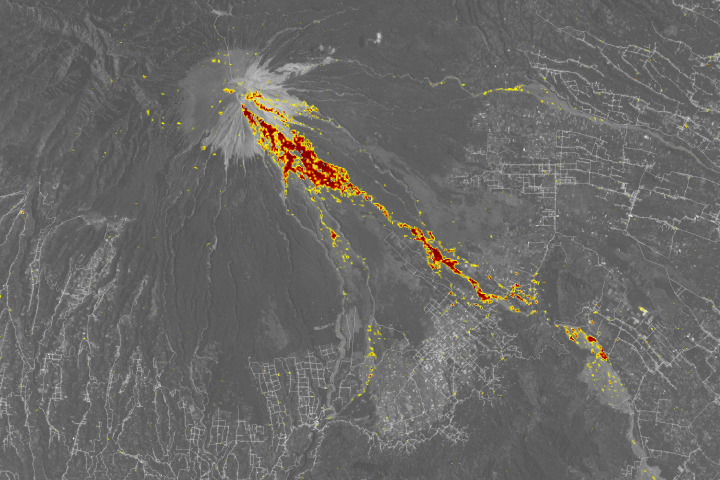 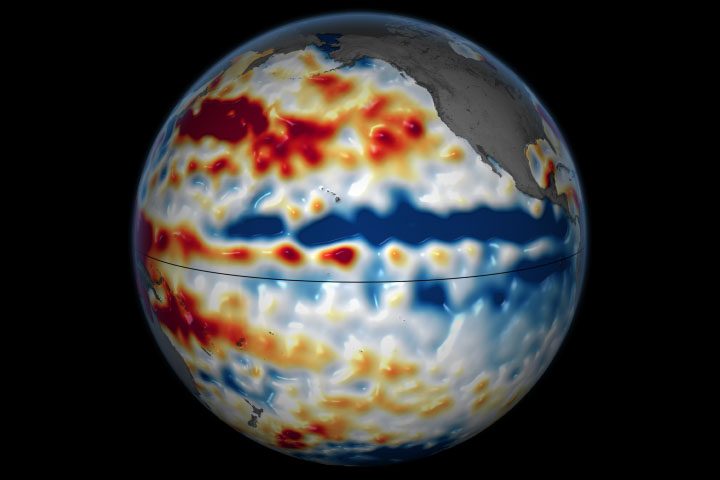 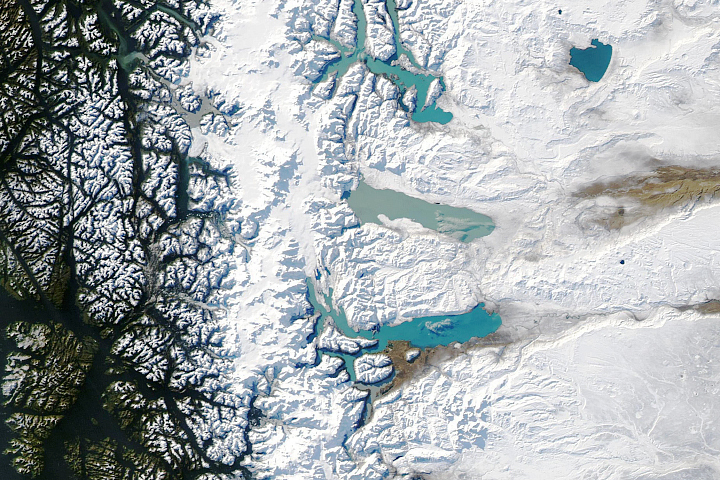