An Ice Tongue Reaching for Land 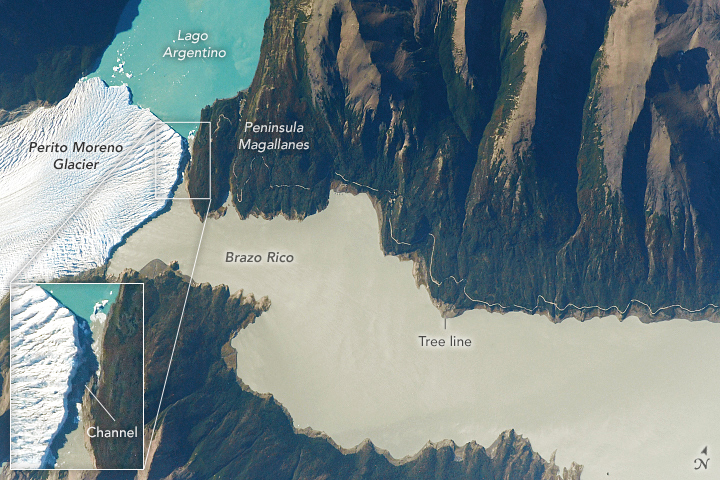 The heavily textured surface of Perito Moreno, one of the world’s last non-retreating glaciers, glistens in this detailed photograph taken by an astronaut from the International Space Station (ISS). The glacier, located at the southern end of the Southern Patagonian Icefield in Argentina, rises more than 60 meters (200 feet) above the surface of Lago Argentino to the northeast. It marks the separation point between the main lake and its murkier southern branch, Brazo Rico. A single road winds along the coast of Peninsula Magallanes toward Moreno.

The surface of Perito Moreno is marked by a mixture of glacial cracks (crevasses) and ice columns (seracs). These features are the result of shear stress within the glacier, as the “river of ice” cycles through periods of advancement and retreat. Where the glacier meets the lake, ice separates in a sonorous event called calving that happens almost daily. This spectacle has made Los Glaciares National Park, a UNESCO World Heritage Site and a popular tourist destination.

Periodically, Moreno advances all the way to Peninsula Magallanes, acting as a natural dam and cutting off Brazo Rico from the rest of Lago Argentino. During such periods, Brazo Rico’s water muddies and its level rises. While the channel to Lago Argentino is open in this photo, evidence of this cyclical process is manifested in the higher tree line surrounding Brazo Rico. The rise and fall of the water creates a bathtub-ring separator between the shore and the lower forest. In contrast, the forests around Lago Argentino reach all the way to the lake’s edge.

Astronaut photograph ISS064-E-39659 was acquired on March 2, 2021, with a Nikon D5 digital camera using a focal length of 1600 millimeters. It is provided by the ISS Crew Earth Observations Facility and the Earth Science and Remote Sensing Unit, Johnson Space Center. The image was taken by a member of the Expedition 64 crew. The image has been cropped and enhanced to improve contrast, and lens artifacts have been removed. The International Space Station Program supports the laboratory as part of the ISS National Lab to help astronauts take pictures of Earth that will be of the greatest value to scientists and the public, and to make those images freely available on the Internet. Additional images taken by astronauts and cosmonauts can be viewed at the NASA/JSC Gateway to Astronaut Photography of Earth. Caption by Alex Stoken, Jacobs, JETS Contract at NASA-JSC.

Perito Moreno is one of the few glaciers on Earth that are not retreating. 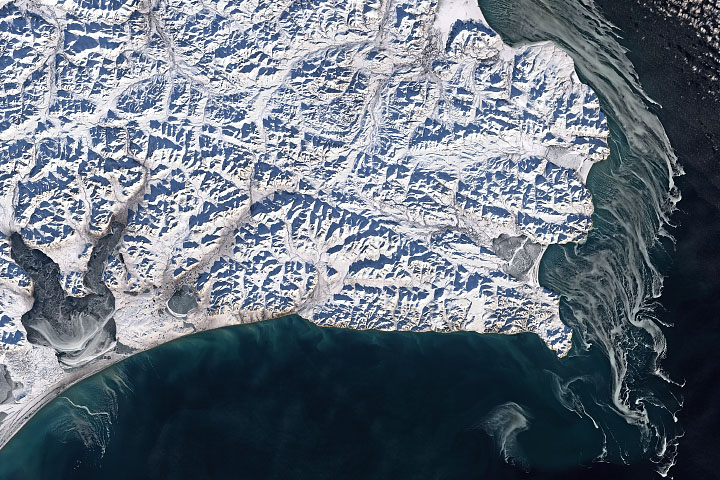 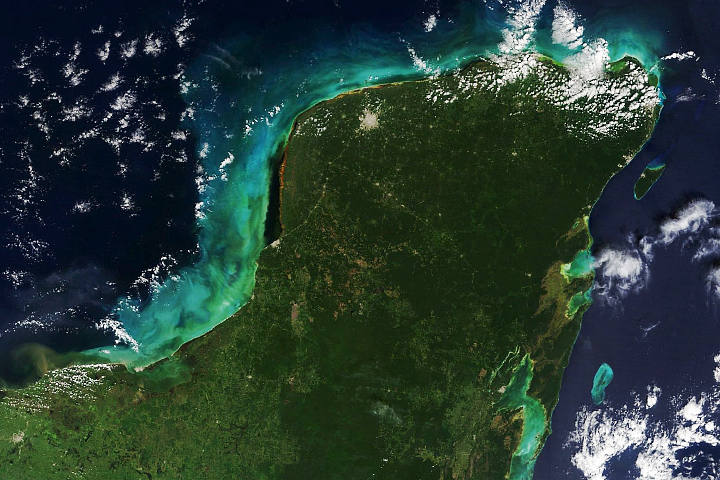