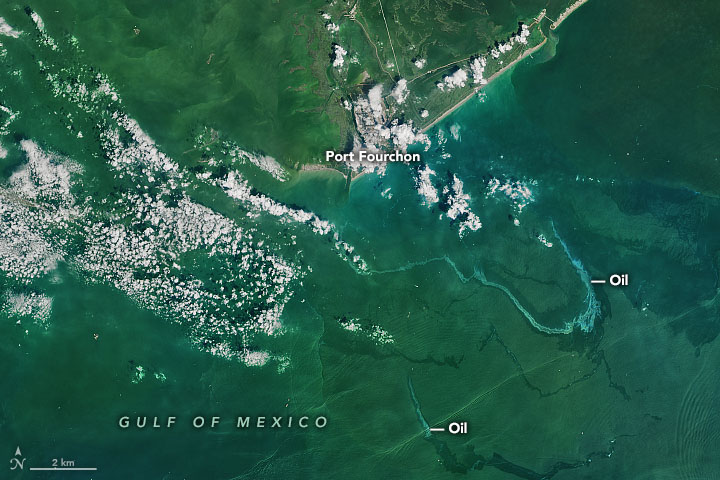 Hurricane Ida left an extensive trail of damaged homes, infrastructure, and lives from Louisiana to New England. It also has left a stain on the sea. Two weeks after the storm, several federal and state agencies and some private companies are working to find and contain oil leaks in the Gulf of Mexico.

The U.S. Coast Guard has assessed more than 1,500 reports of pollution in the Gulf and in Louisiana, and it “is prioritizing nearly 350 reported incidents for further investigation by state, local, and federal authorities in the aftermath of Hurricane Ida.” The Coast Guard is working with the Environmental Protection Agency, the state of Louisiana, the National Ocean Service, and other agencies to chronicle and monitor the state of coastal waters and infrastructure.

On September 3, 2021, the Operational Land Imager (OLI) on Landsat 8 acquired this natural-color image of apparent oil slicks off the southeastern Louisiana coast near Port Fourchon, a major hub of the oil and gas industry.

Hurricane Ida caused the disruption of 90 to 95 percent of the region’s crude oil and gas production, while also damaging current and abandoned pipelines and structures. According to many news reports, the surface oil slicks near Port Fourchon (shown above) are likely related to as many as three damaged or ruptured submarine pipelines. It is unclear how much oil has spilled into the Gulf of Mexico.

The National Oceanic and Atmospheric Administration has conducted aerial surveys of some offshore waters and has released the photos online. The NASA-sponsored Delta-X research team has also been working in the area and was called upon to make some observations of the slicks and other coastal changes with synthetic aperture radar.

Beyond active oil and gas extraction platforms, the seafloor of the Gulf of Mexico is covered in a maze of pipelines, capped wellheads, and other infrastructure that can be vulnerable to storm events. In a report issued earlier this year, the U.S. Government Accountability Office stated: “Since the 1960s, the Bureau of Safety and Environmental Enforcement has allowed the offshore oil and gas industry to leave 97 percent of pipelines (18,000 miles) on the seafloor when no longer in use. Pipelines can contain oil or gas if not properly cleaned in decommissioning.”

Federal and state agencies and private companies are working to find and contain oil leaks in the Gulf of Mexico.