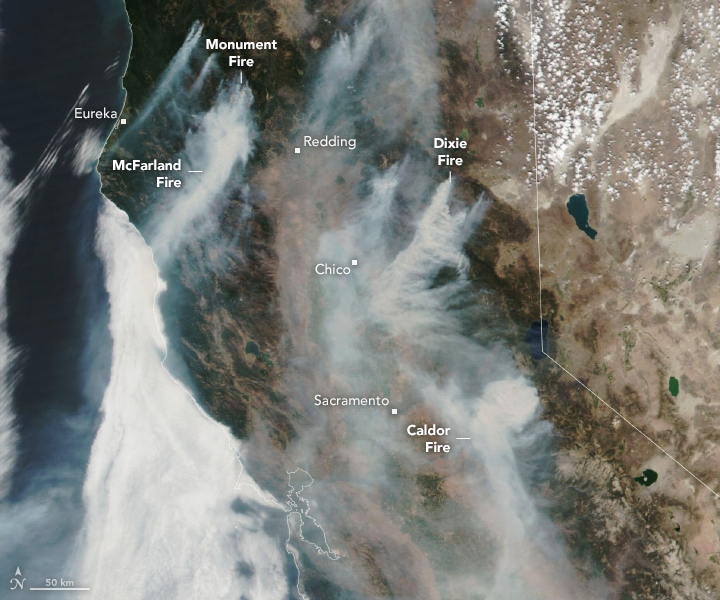 The worst of California’s fire season typically comes in autumn, but severe drought and bouts of unusually warm weather have helped sustain several major fires in northern California for much of August.

On August 19, 2021, the Visible Infrared Imaging Radiometer Suite (VIIRS) on the NOAA-NASA Suomi NPP satellite acquired a natural-color image (above) of fires raging in California. While smoke has often blown west in recent weeks, shifting winds have begun to darken skies in northern and central California, triggering air quality alerts in Sacramento and San Francisco.

The Dixie fire, which was 35 percent contained as of August 20, has grown to become the second-largest fire on record in California. In addition to charring more than 1,000 square miles (2600 square kilometers), the blaze is responsible for the destruction of at least 1,225 structures, including hundreds of homes in Greenville, California. It recently crossed the crest of the Sierra Nevada—something California firefighters have never observed a fire doing before.

One of the newest and most worrisome fires was burning east of Sacramento. Though initially small, the Caldor fire exploded in size on August 16 as winds picked up, forcing thousands of people from their homes and destroying much of the town of Grizzly Flats. As of August 20, it was completely uncontained, according to Cal Fire. 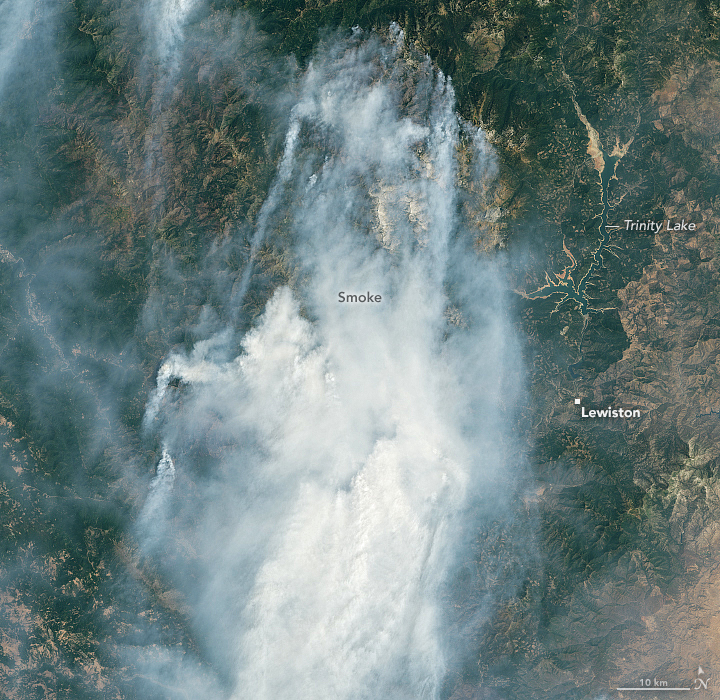 More than 11,000 firefighters are deployed in northern California battling these and several other fires. On August 19, the Operational Land Imager (OLI) on Landsat 8 acquired a closer view (second image) of two blazes—the Monument and McFarland fires, the second- and third-largest fires currently burning in California. The McFarland fire was 52 percent contained on August 20; the Monument fire was 10 percent contained.

Emissions from California’s wildfires are adding up. According to Mark Parrington, a scientist with the European Centre for Medium-Range Weather Forecasts, estimates of carbon emissions from the state’s wildfires from June-August top any other year in nearly two decades.

Parrington uses a satellite-based technique to monitor fire emissions for the Copernicus Atmosphere Monitoring Service (CAMS). CAMS provides estimates of near-real-time emissions from wildfires from its Global Fire Assimilation System (GFAS), which assimilates observations of fires acquired by NASA’s Aqua and Terra satellites. The emissions data record spans from 2003 to the present.

In a recent report from the Intergovernmental Panel on Climate Change, scientists drew an unequivocal link between human activity and global warming. The authors of that report also pointed to observations showing increases in drought and fire weather in the western United States. They expect this trend toward more serious fire weather in the western U.S. to continue in the future.

Several destructive fires have charred landscapes in northern California, and their emissions are adding up. 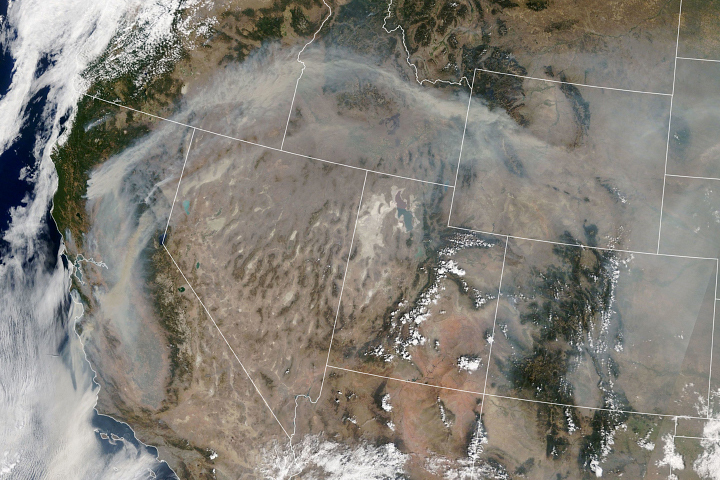 Smoke Continues to Spread Across the U.S. West