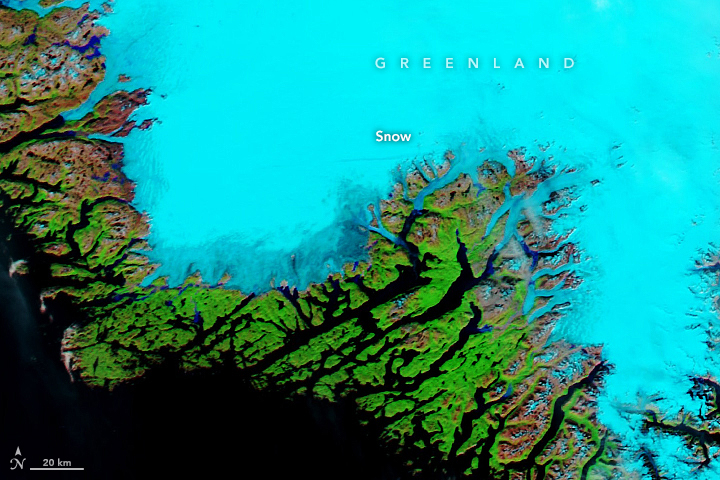 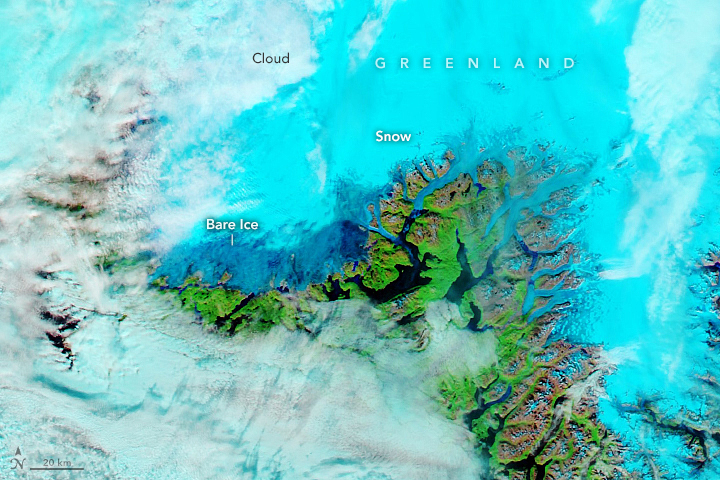 The Greenland Ice Sheet underwent two bouts of intense melting in July 2021, and forecasts called for even more to follow. They were right. Summer heat spurred another major melt event on August 14–15, 2021, but this time, the melting was exacerbated by rainfall.

Every year from around May to early September, melting takes place across the vast sheet of ice that covers Greenland. Besides contributing directly to sea level rise, meltwater can flow to the base of the ice sheet via crevasses and moulins, accelerating the flow of ice toward the ocean.

Within a melting season there can be the occasional “melt event”—brief periods with more melting and runoff than during ‘typical’ summer days. The seventh-largest melt event on record (by area) occurred on July 28, when melting covered about 881,000 square kilometers (340,000 square miles) of the ice sheet, according to data from the National Snow and Ice Data Center. Melting on August 14—the peak of the unusual late-summer event—was slightly smaller, covering about 872,000 square kilometers.

According to Lauren Andrews, a glaciologist with NASA’s Global Modeling and Assimilation Office, the pattern of melting differed for each event. “While the late-July melt event was extensive in northern Greenland, the August event was focused in southern Greenland,” she said.

The island’s southern tip was visible amid clouds on August 15, 2021, when the Moderate Resolution Imaging Spectroradiometer (MODIS) on NASA’s Aqua satellite acquired this image (above) of part of the melt area. The image is false color to better differentiate between areas of clouds (white), snow (cyan), bare ice (blue), and meltwater or slushy ice (darker blue). Ocean water appears the darkest blue, almost black. For comparison, a second image shows the area on August 12, prior to the melt event.

Notice that by August 15, the area of bare ice extends farther inland. “The snow line has retreated, exposing more of the darker, underlying ice,” Andrews said. “This retreat is most obvious when we look closely at the outlet glaciers and was likely driven by the large melt event on August 14–15.”

Andrews also noted that the melting extended well inland toward the interior of the ice sheet and reached Summit Station—National Science Foundation’s research station located near the top of the ice sheet, nearly two miles above sea level. 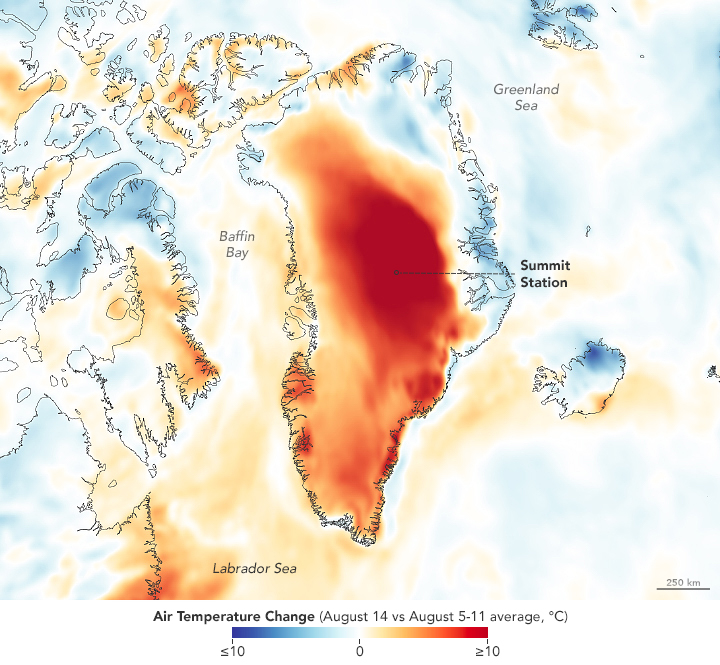 The melting was provoked by warm air that moved over Greenland and produced unusually high temperatures. The map above shows the short-term warm up over Greenland; it depicts how much the air temperature on August 14, 2021, was above or below temperatures from the week before (averaged from August 5 to 11, 2021). The map was derived from the Goddard Earth Observing System (GEOS) model and represents air temperatures at 2 meters (about 6-7 feet) above the ground. Modeled data, which uses mathematical equations that represent physical processes, offer a broad, estimated view of a region where ground-based weather stations are sparse.

Widespread rainfall in southern Greenland contributed to the melting. Rain was even observed by National Science Foundation personnel at Summit Station on August 14, 2021—the first time since the start of field observations there in the late 1980s, according to Von Walden of the Summit Station Science Coordination Office and Washington State University.

Warm air temperatures alone, not rain, caused previous major melt events at Summit Station, including those in 2012 and 2019, according to Christopher Shuman, a University of Maryland, Baltimore County, glaciologist based at NASA’s Goddard Space Flight Center. Studies have shown that the amount of melting across Greenland caused by rain has increased over the recent past, in both summer and winter.

Large melt events including those of the 2021 season are generally short-lived and contribute a relatively small amount to the total melting that occurs across a season. But they can have a lasting effect on the ice sheet. Melting can trigger processes that cause the ice surface to darken and modify the underlying snow and firn, which can exacerbate future melting and runoff, even under normal atmospheric conditions.

“During melt events, these processes can occur over parts of the ice sheet that do not typically experience melt, making the impact more widespread,” Andrews said. “Positive feedbacks like these are starting to take their toll.”