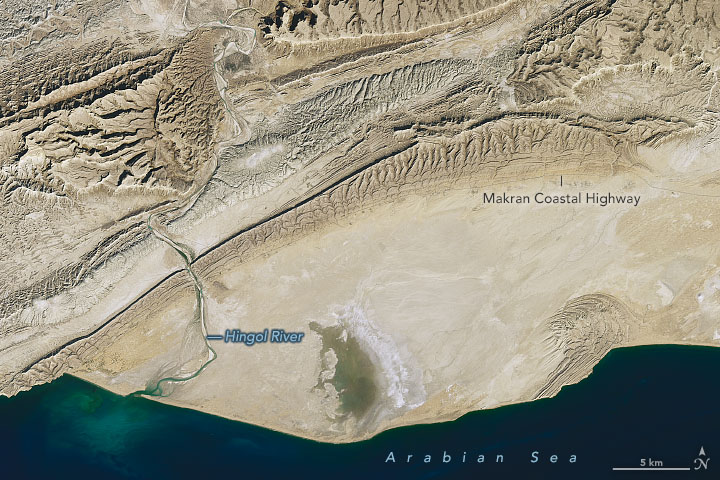 With its rocky terrain, mountain caves, and beautiful beaches, Hingol National Park is one of the natural wonders of Pakistan. It is also has significant cultural importance.

The images on this page show sections of Hingol National Park as observed on February 13, 2021, by the Operational Land Imager (OLI) on Landsat 8. Hingol spans around 6,200 square kilometers (2,400 square miles) across three districts of the Balochistan Province: Lasbela, Awaran, and Gwadar.

The park is named for the Hingol River, which flows through this dry region year round and is the longest in Balochistan. Before emptying into the Arabian Sea, the Hingol flows into an estuary that supports threatened fish, birds, and crocodiles. It is part of the largest national park for the protection of endangered species in the country. The park is also home to wild Sindh Ibex, Balochistan Urial, and Chinkara Gazelle.

Located approximately 200 kilometers (120 miles) northwest of Karachi, Hingol National Park features several distinct ecosystems. In the north, it includes an arid subtropical forest, while dry, mountainous terrain covers the western portion. In the east, the park is renowned for a group of mud volcanoes that spew methane and mud instead of lava. Along the coast, Hingol includes caves, beaches, and a marine ecological zone that is home to dolphins, sea turtles, and mangroves. The water body in the image above is an ephemeral lake near Sapat Beach. 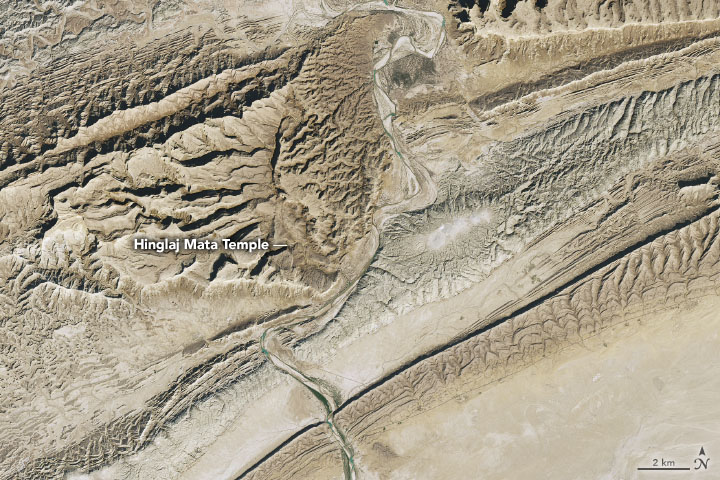 Many Hindus travel to the park to visit the Hinglaj Mata Mandar, a famous religious site located in a mountain cave on the banks of the Hingol River. On their pilgrimage, worshippers walk on rock outcrops and between steep cliffs, while also performing ritual bathing in the river.

The park is also well known for its unique rock statues (just out of the image to the west). One formation, called the Princess of Hope, resembles a woman looking into the distance. The Balochistan Sphinx is a natural rock formation that looks like the Great Sphinx of Giza. A portion of the national Makran Coastal Highway runs through the park and provides drivers with a front row seat to the many of these rock formations and landscapes.

With its rocky terrain, mountain caves, and beautiful beaches, Hingol National Park is one of the natural wonders of Pakistan.