Himalayas, Near and Far 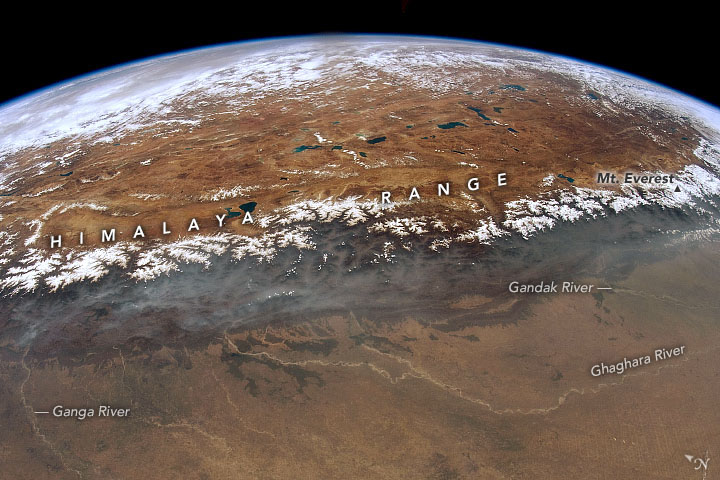 Astronauts onboard the International Space Station (ISS) shot these photographs of the Himalayas, the Tibetan Plateau, and the Indo-Gangetic plain.

The wide view above, taken in May 2012 by astronaut Don Pettit shows a dramatic 1000 kilometer (600 mile) stretch of the snow-capped peaks of the Himalayas. The Ganges/Ganga Plains occupy the foreground, and the numerous lakes and mountain glaciers of the Tibetan Plateau are visible beyond the mountains. The major rivers on the plains—the Ganges, Ghaghara, and Gandak—have transported vast amounts of sediment from the Himalayas over millions of years and deposited much of it in very large alluvial fans.

Due to the oblique viewing angle from the ISS, the curve of Earth’s limb defines the horizon visible from orbit. This photo view is close to the magnificent view that would have greeted Pettit’s eyes that day because the lens he used (16 mm) is fairly close to the focal length of the human eye (about 25 mm). To the unaided eye, Chomolungma/Mount Everest, the highest peak on Earth (8,848.86 meters or 29,031.7 feet) is indistinguishable in this panoramic view.

The second photo was shot by astronaut Randy “Komrade” Bresnik in December 2017 while looking southwest through a much longer lens (420 mm). It shows details from the part of the range that includes Mount Everest, which appears without its usual cloud cover. The extensive monsoon cloudiness that brings rain had not yet set in, though southerly winds blew up some of the major valleys onto the Tibetan Plateau, causing cloud streamers to rise. Two of the largest valleys that cut through the Himalaya Range lie just east and west of Chomolungma/Everest.

Another reason for the clarity of the air on this day was that the usually hazy air pollution of the region was blown away by the winds. A gray mass of air pollution (upper left) still obscured some of the landscape detail on the plains.

Astronaut photograph ISS031-E-67020 was acquired on May 23, 2012, with a Nikon D2Xs digital camera using a 16 millimeter lens. Astronaut photograph ISS053-E-317703 was acquired on December 5, 2017, with a Nikon D5 digital camera using a 420 millimeter lens. Both were provided by the ISS Crew Earth Observations Facility and the Earth Science and Remote Sensing Unit, Johnson Space Center. The images were taken by members of the Expedition 31 and Expedition 53 crews. The images have been cropped and enhanced to improve contrast, and lens artifacts have been removed. The International Space Station Program supports the laboratory as part of the ISS National Lab to help astronauts take pictures of Earth that will be of the greatest value to scientists and the public, and to make those images freely available on the Internet. Additional images taken by astronauts and cosmonauts can be viewed at the NASA/JSC Gateway to Astronaut Photography of Earth. Caption by Justin Wilkinson, Texas State University, JETS Contract at NASA-JSC.

On Top of the World: Everest and Makalu

Astronauts on board the International Space Station (ISS) have a unique view of the world because of their position in a low orbit (200 nautical miles, 360 kilometers) relative to satellites and their ability to look at any angle out the windows of the spacecraft. ISS crewmembers recently took advantage of their vantage point to photograph a series of oblique views of the Himalayas looking south from over the Tibetan Plateau. At first glance, one might think that the image looks like a picture taken from an airplane, until you remember that the summits of Makalu (left, 8,462 meters, or 27,765 feet) and Everest (right, 8,850 meters, or 29,035 feet) are at the heights typically flown by commercial aircraft. The full mosaic covers over 130 kilometers (80 miles) of the Himalayan front, and could never be seen this way from an airplane.