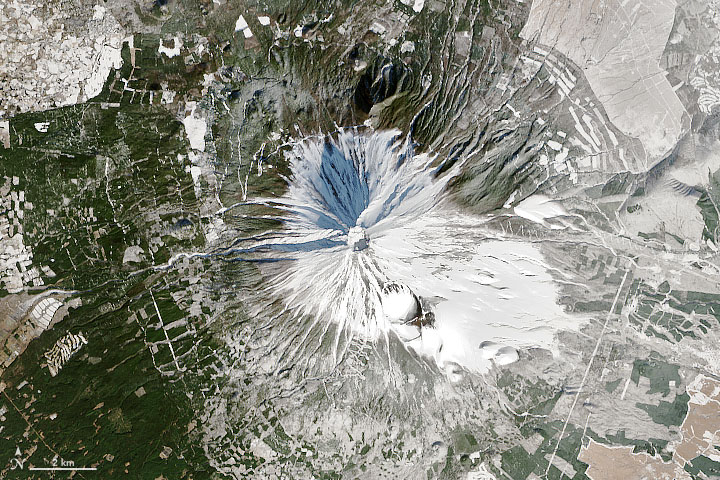 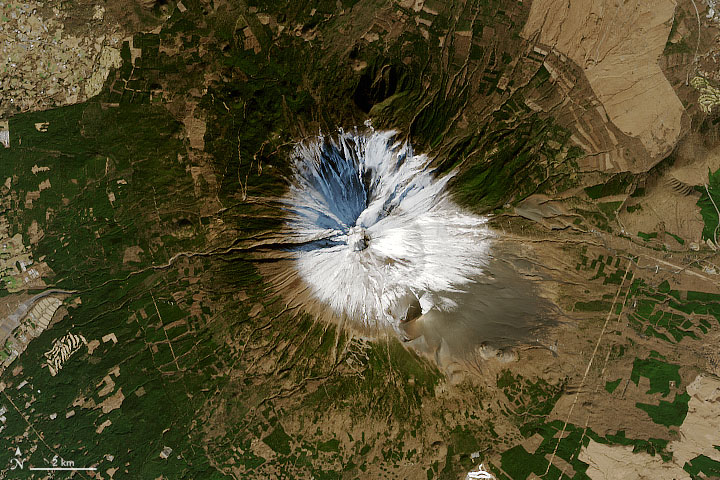 Even as record snowfall has clobbered Japan’s western coast, much of the country’s eastern half has avoided major snow accumulation this winter. Notably, Mount Fuji’s iconic snow cap—which is normally visible throughout December—has been small or absent this year.

The mountain peak, the tallest in Japan, did get a dusting on September 28, 2020, its first snowfall of the year. But that melted off quickly, and Fuji’s snow cap remained elusive in the coming months. Normalized Difference Snow Index (NDSI) observations from NASA’s Terra satellite indicate that snow cover on the mountain last month was among the lowest in the satellite's 20-year record for any December.

Ground-based weather stations made similar observations. “Stations around Mount Fuji recorded much less precipitation than usual in December,” said Toshio Iguchi, a remote sensing scientist based at NASA’s Goddard Space Flight Center. “Through December 24, it was only 10 percent of an average year.” Weather data also indicate that temperatures around the mountain were warm during much of December.

In the images at the top of the page, the bare upper slopes of the mountain were visible to the Operational Land Imager (OLI) on the Landsat 8 satellite on January 1, 2021. For comparison, the other image, also acquired by OLI, shows Mount Fuji on December 29, 2013, on a day it was snowier. The mountain had a slightly above average amount of snow in December 2013, according to the Terra NDSI observations.

Toward the end of December 2020, the mountain finally received some snow. But even chillier January weather did not guarantee that the snow cap would last. After a few days, the snow cap was much reduced as temperatures creeped above freezing. And part of the snow cap was likely blown away by wind, according to Weather News.

While local weather conditions are key to whether Fuji’s snow cap is present on any given day, long-term climate data indicates that conditions on the peak are changing. One recent study found the mountain’s timberline had moved upslope by 30 meters (100 feet) over the past four decades, likely due to a 2 degree Celsius (3.6 degrees Fahrenheit) increase in summer temperatures near the peak.