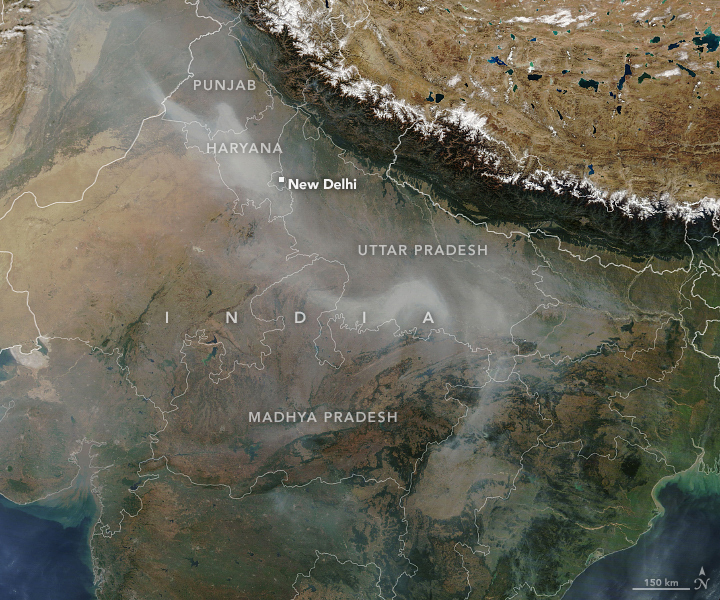 A thick blanket of smoke has darkened skies again over northern India. Every year, farmers light large numbers of small fires between September and December—after the monsoon season—to burn off rice stalks and straw leftover after harvest, a practice known as stubble or paddy burning.

Satellite data indicates that paddy fires were quite numerous this year, particularly in the state of Punjab. The Visible Infrared Imaging Radiometer Suite (VIIRS) sensor on the Suomi NPP satellite made nearly 87,000 active fire detections through mid-November across four rice-growing states in the region—Punjab, Haryana, Madhya Pradesh, and Uttar Pradesh. That is the second most the sensor has observed for the post-monsoon period since VIIRS first collected data in 2012. About 80 percent of the fires in 2020 occurred in Punjab.

Hiren Jethva, a Universities Space Research Association (USRA) scientist based at NASA’s Goddard Space Flight Center, uses satellites to track fire activity in the region. “We predicted in early October that this would end up being one of the most active years for fires on the VIIRS record, and that is exactly what has happened so far,” said Jethva, who forecasted fire activity by analyzing the greenness, or Normalized Difference Vegetation Index (NDVI) values, of the rice crop as measured by satellites in September. “The number of fires that happen is directly related to the area planted and to the yield.” According to news reports, good monsoon rains and an increase in the price of rice incentivized farmers to plant more than usual in 2020. 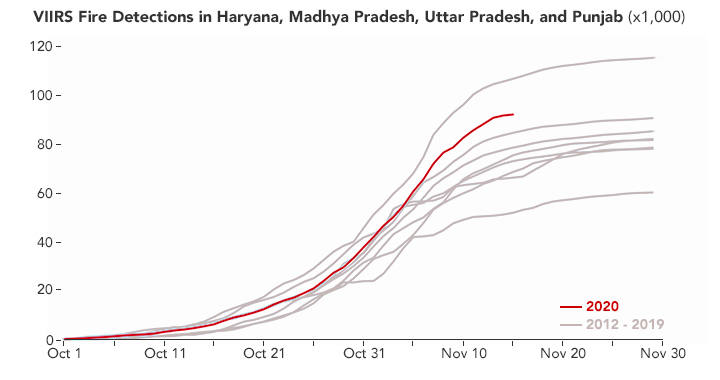 The timing of the 2020 fires was somewhat unusual. “Because of labor shortages related to the spread of COVID-19, farmers had to do more direct sowing of seed rather than transplanting seedlings from nurseries. This moved the whole season earlier by about a week to ten days, and translated into record fire activity in the Punjab early in the season and a longer burning season than usual,” explained Pawan Gupta, a USRA scientist at NASA’s Marshall Space Flight Center.

Scientists carefully watch the timing of planting because there is a relationship between planting, water usage, and air quality. Historically, rice has been planted in May, before monsoon rains come, which requires that farmers use a lot of groundwater. Starting in 2009, authorities prohibited May planting in an effort to protect the region’s dwindling aquifers. However, there is a tradeoff between preserving groundwater and keeping the air clean. Later planting and harvests leave farmers little time to clear crop debris before the next planting, making them more likely to burn stubble rather than disposing of it in other ways. It also pushes the burning season into mid- and late-November, when weather patterns typically make it more likely that smoke will stagnate over the Indo-Gangetic Plain.

The long and active burning season has led to plenty of bad air days in the Indo-Gangetic Plain in 2020. For instance, on November 9, New Delhi saw levels of particulate matter soar to 950 micrograms per cubic meter, 38 times more than what is considered safe by the World Health Organization guidelines. The Moderate Resolution Imaging Spectroradiometer (MODIS) on NASA’s Terra satellite captured the image at the top of the page showing a river of smoke from crop fires spreading over the city. Emissions from vehicles, factories, cookstoves, fireworks, and other local sources contribute to the haze as well. While outbreaks of dangerous air are common at this time of year, there is particular concern in 2020 because India is facing a surge in coronavirus cases at the same time.

One positive trend that showed up in the satellite data this year was a reduction in fire activity in Haryana and Uttar Pradesh. The two states have seen fire counts drop every year since 2016, likely because of increased enforcement of bans on paddy burning. In fact, VIIRS detected fewer fires in 2020 in these two states during the post-monsoon season than during any year since 2012. In contrast, Madhya Pradesh saw record numbers of fires during the same period in 2020, with most fires in the northern part of the state.

To improve public understanding of paddy fires and dispel confusion about how satellite observations of fires and air quality work, Gupta has organized a community outreach forum that is open to government officials, journalists, researchers, and the public. “Over the years, we have noticed that there is a great deal of interest in this topic, but also a fair amount of confusion about which sensors and satellites produce the most meaningful data for tracking paddy fires," explained Gupta. “We’re trying to address this by doing some of the analysis out in the open this year, building technical skills, and educating people on the details of sensors like MODIS and VIIRS.”

Fires in Southeast Asia in 2020

Large numbers of agricultural fires and wildfires are creating clouds of smoke during the summertime. 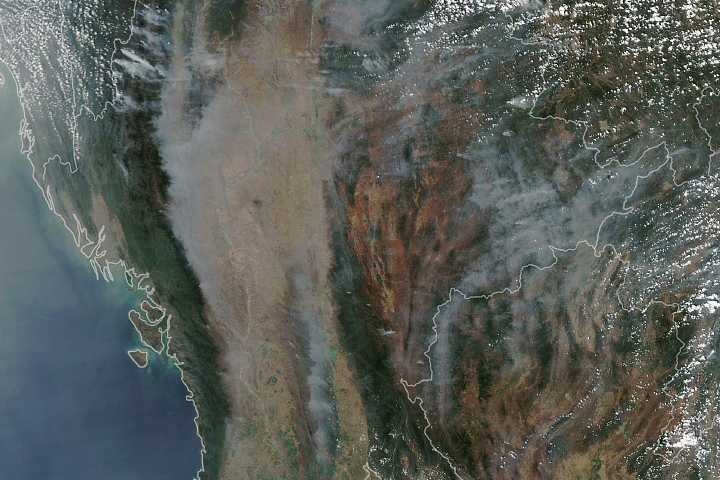 Hundreds of fires are clustered in northwest India in this natural-color image from October 26, 2010.