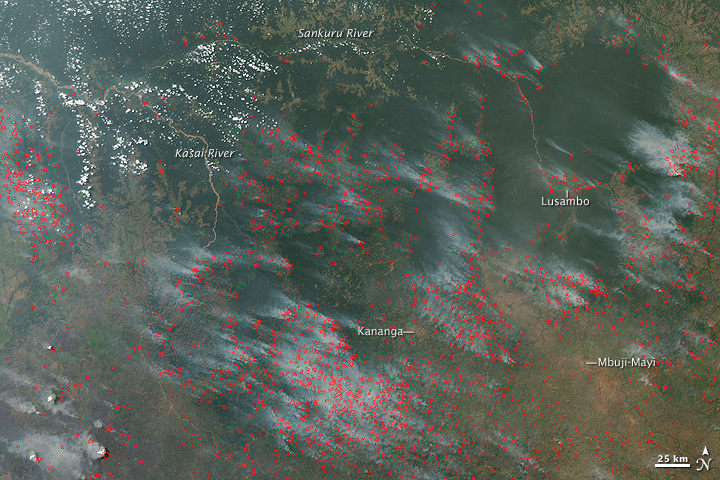 Widespread agricultural burning is common in the dry season in Africa. As the rainy season migrates north and south across the continent each year, a wave of widespread fires precedes its arrival. This image of the Kasai region of Democratic Republic of Congo shows hundreds of active fires (marked in red) burning on July 20, 2009. The tan and light green landscapes are likely a mixture of agricultural land, grassland, and savanna, while the deep green areas between the Sankuru and Kasai Rivers are tropical forest.

Although many of the fires that occur each year during Africa’s dry season occur in landscapes where people have been living and farming for generations, the growing population is also using fire to clear new agricultural land out of Africa’s tropical forests. Many of the fires in the image have only small smoke plumes, and some appear to be making no smoke. Dry grass or crop residue would generate less smoke than live or recently cut trees. The large amount of smoke coming from the fires along the margins of the forests, however, may indicate that forest is being cleared.

The large version of the image shows fires are burning across a wider area, including parts of Angola (southwest), Zambia (southeast), and Tanzania (east). The image was captured by the Moderate Resolution Imaging Spectroradiometer (MODIS) on NASA’s Aqua satellite.

As the rainy season migrates north and south across Africa each year, a wave of widespread fires precedes its arrival. Fires were widespread across central Africa in early July 2009.

This image from the Moderate Resolution Imaging Spectroradiometer (MODIS) on NASA’s Aqua satellite from July 8, 2009, shows thick smoke from hundreds of fires burning in central Africa.

Fires in Angola and Democratic Republic of the Congo

Acquired June 3, 2010, this natural-color image shows fires burning throughout Angola and the Democratic Republic of the Congo.