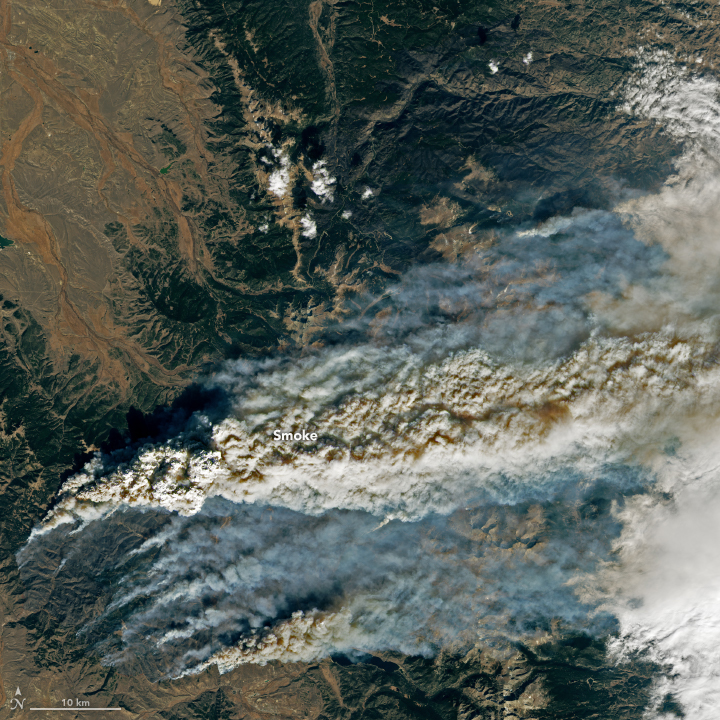 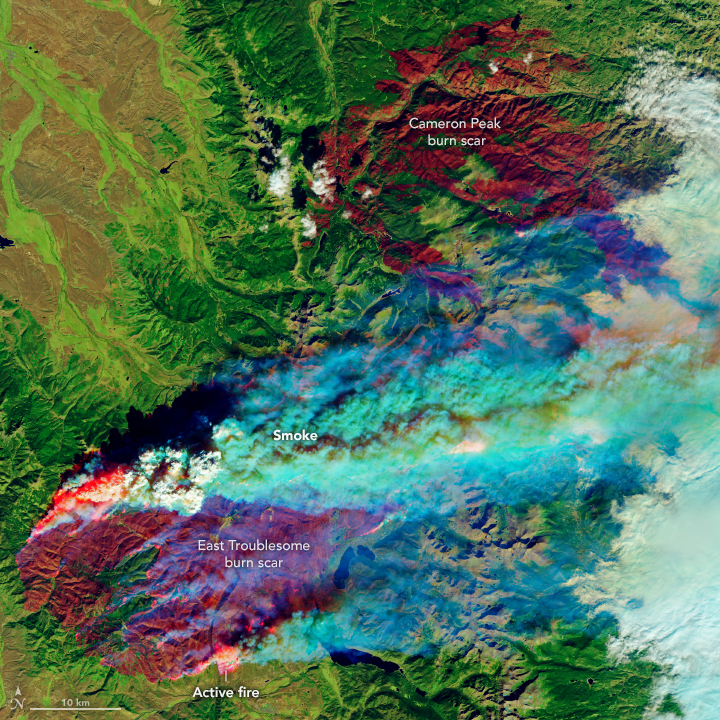 On October 14, 2020, a small fire started north of Hot Sulphur Springs in north-central Colorado. Within ten days, the East Troublesome fire had burned through more than 190,000 acres (77,000 hectares) and had become Colorado’s second largest fire (by area) on record. As of October 26, 2020, it was 15 percent contained.

East Troublesome experienced extensive growth on October 21, growing from 30,000 acres to 170,000 acres in about 24 hours. The rapid growth was fueled by strong winds that blew flames east into the Rocky Mountains. The fire burned quickly through lodgepole pine forests, which had already been weakened by drought and an infestation of bark beetles. The blaze has killed at least two people, destroyed hundreds of homes, and prompted evacuations in several nearby areas, including the entire town of Grand Lake.

The fire has since split into two fingers in Rocky Mountain National Park. One section, now known as the Thompson Zone, moved northeast along Big Thompson River and crossed the rocky terrain of the continental divide.

Snowfall on October 25 slowed the spread of the fire and helped firefighters keep the blaze away from Estes Park, where more than 6,000 residents were evacuated. The snow also slowed the Cameron Peak fire, located about 10 miles north of East Troublesome. Cameron Peak has burned more than 200,000 acres (80,000 hectares) and is the largest fire in state history by acre. As of October 26, the fire areas received about 6 to 12 inches (15 to 30 centimeters) of snow, with light snow predicted to continue through the day.

Despite the snow, authorities say large downed logs and other fuels under the forest canopy are still expected to burn. Temperatures are also expected to increase again on October 27. U.S. Forest Service officials estimate East Troublesome and Cameron Peak will be fully contained by early November.

The blaze grew 140,000 acres in 24 hours to become the second largest fire in Colorado history. 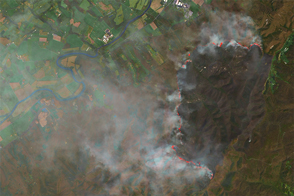 In April 2016, a wildfire broke out in Shenandoah National Park.