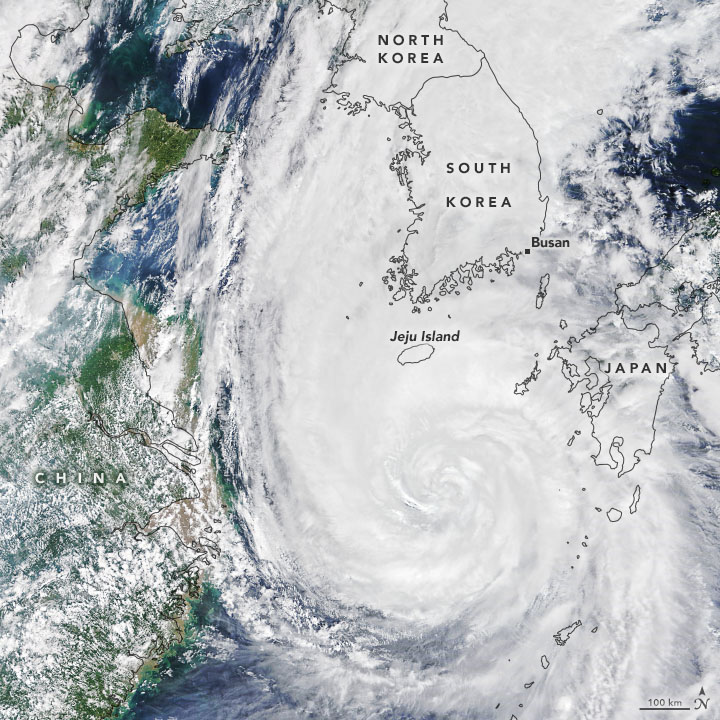 A peninsula that typically sees one typhoon per year might face three landfalling storms in two weeks. One week after Typhoon Bavi brought fierce winds and rain to North and South Korea, Typhoon Maysak plowed into South Korea as a category 2 storm.

The Moderate Resolution Imaging Spectroradiometer (MODIS) on NASA’s Terra satellite acquired this natural-color image of Maysak in the late morning on September 2, 2020. At the time, the storm had sustained winds of roughly 190 kilometers (120 miles) per hour.

Shortly before landfall, in the early hours of September 3, the U.S. Joint Typhoon Warning Center reported sustained winds of 170 kilometers (105 miles) per hour as the eye of the storm was southwest of Busan, South Korea’s second-largest city and the world’s fifth-largest port. It is believed to be just the sixth typhoon of category 2 strength or higher to hit the Korean Peninsula since 1951.

Maysak reached typhoon strength on August 29 and intensified to become the strongest typhoon so far in the 2020 Western Pacific season. At peak intensity on September 1, Maysak’s winds measured 230 kilometers (145 miles) per hour, a category 4 storm. The typhoon battered Okinawa, the Ryukyu Islands, and Jeju Island before moving ashore on the Korean Peninsula. Forecasters called for widespread rainfall of 100 to 200 millimeters (4 to 8 inches). That rain will fall upon ground that has been soaked by South Korea’s second-wettest monsoon season on record and by rains from Typhoon Bavi.

The storm troubles may not be over for North and South Korea. Another typhoon, Haishen, has been developing south of Japan, and several potential storm tracks have it making landfall on the Korean Peninsula on September 6 or 7. As of the evening of September 2, Haishen had sustained winds of 130 kilometers (80 miles) per hour, with predictions that it could strengthen to category 4 strength while moving over the extremely warm water of the tropical Western Pacific.