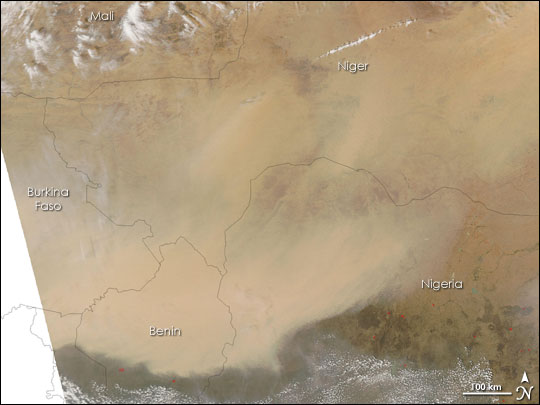 Thick clouds of dust swept across western Africa on February 25, 2005. The dust is blowing out of the Sahara Desert in northeastern Niger and northern Chad. The storm has kicked up so much dust that the ground is not visible in Nigeria, Benin, and Burkina Faso. To the south of the storm, red dots mark out the locations of fires burning in the Sahel, Africa’s grasslands. The Moderate Resolution Imaging Spectroradiometer (MODIS) on NASA’s Aqua satellite captured this image on February 25, 2005. The Aqua satellite moves from the southeast to the northwest as it orbits the Earth collecting data. The white area in the lower right corner of the image was out of MODIS’ field of vision in this particular overpass.

NASA image courtesy the MODIS Rapid Response Team at NASA GSFC. The image is available in additional resolutions, including MODIS’ maximum resolution of 250 meters per pixel.

Dust Storm Off the Coast of Western Africa