A Fiery Month in Zulia 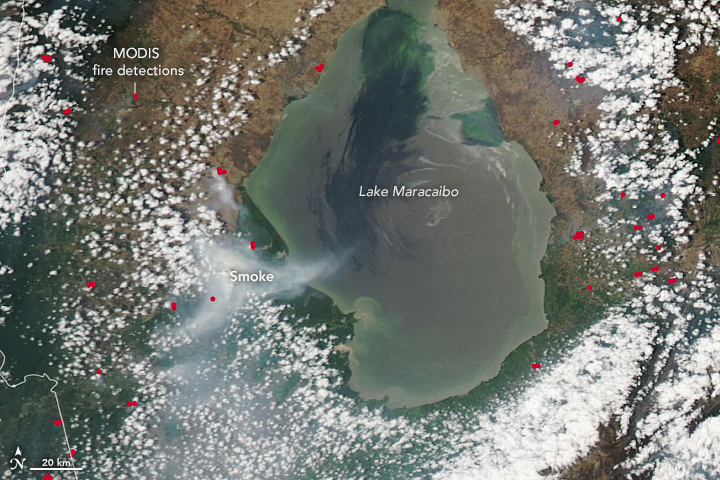 For much of March and April 2020, satellites have detected signatures of heat and smoke from fires burning in northwestern Venezuela. Some of them burned in and near Ciénagas del Catatumbo National Park, a flat swampy area west of Lake Maracaibo known for its rainforests full of unusual plant and animal life.

Throughout March, satellites detected short-lived fires in the northwestern state of Zulia—likely crop or other small-scale fires. But in mid-March a larger, smokier, and more sustained fire cluster emerged in the park in a forested area west of the lake. On March 27, 2020, the Moderate Resolution Imaging Spectroradiometer (MODIS) on NASA’s Aqua satellite acquired an image (above) of a sizable smoke plume over the park. Places where the sensor detected unusually warm temperatures—signs of fires—are shown with red. As seen in the image below, the fire was still smoldering in late-April. 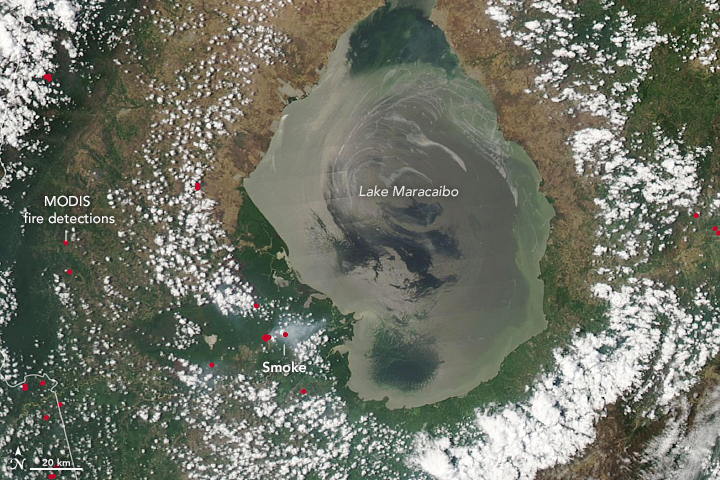 It is not clear what triggered the fire, but Venezuela is in the midst of an ongoing drought. Recent observations from the Gravity Recovery and Climate Experiment Follow On (GRACE-FO) satellites show stark deficits in soil moisture and shallow groundwater in Zulia. The dry weather may be exacerbating Zulia’s normal fire season, which typically runs from January to April in MODIS records of active fire data.

The state’s 2020 fire season is registering as one of the most active in the MODIS record since 2003, according to data analyzed by Robert Field, a scientist at Columbia University and NASA’s Goddard Institute for Space Studies. Satellites observations also show that nearby mountain ranges have been channeling smoke southwest toward the city of Cucuta, noted Jean-Paul Vernier of NASA’s Earth applied sciences disasters program.

After dry weather parched the soil and vegetation, large fires burned in the northwestern Venezuela state.