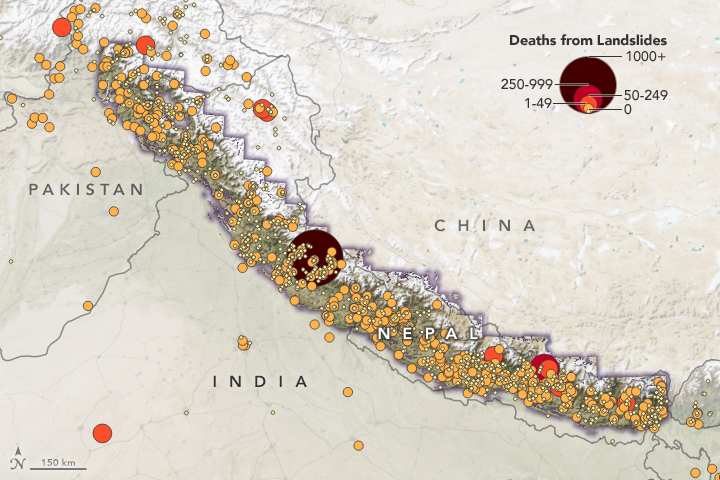 As global climate changes, more frequent and intense rainfall events could cause more landslides in the High Mountain Asia region of China, Tibet, and Nepal. More landslides, especially in areas covered by glaciers and glacial lakes, could set off cascading disasters—such as meltwater floods or landslide dams across streams—that affect areas far downstream.

In the first quantitative study of the link between precipitation and landslides in High Mountain Asia, scientists from NASA, the National Oceanic and Atmospheric Administration (NOAA), and Stanford University used satellite estimates and modeled precipitation data to project how changing rainfall patterns might affect landslide frequency. They found that warming temperatures will likely cause more intense rainfall in some areas, leading to increased landslide activity.

The area known as “High Mountain Asia” stretches from the Himalayas in the east to the Hindu Kush and Tien Shan mountain ranges in the west, and includes parts of China, Tibet, Nepal, India, Pakistan, and Bhutan. More fresh water is stored in the snow and glaciers of this region than any place on Earth outside of the polar regions. At least one billion people rely on that water for drinking and irrigation.

The maps on this page depict past and future landslide hazards in a portion of High Mountain Asia. The map above shows the locations and reported death toll of landslides from 1988 to 2018. The size and color of each circle depicts the amount of lives lost to that event. The maps below project future changes in landslide activity in winter and in summer (monsoon season) between the years 2061 and 2100. 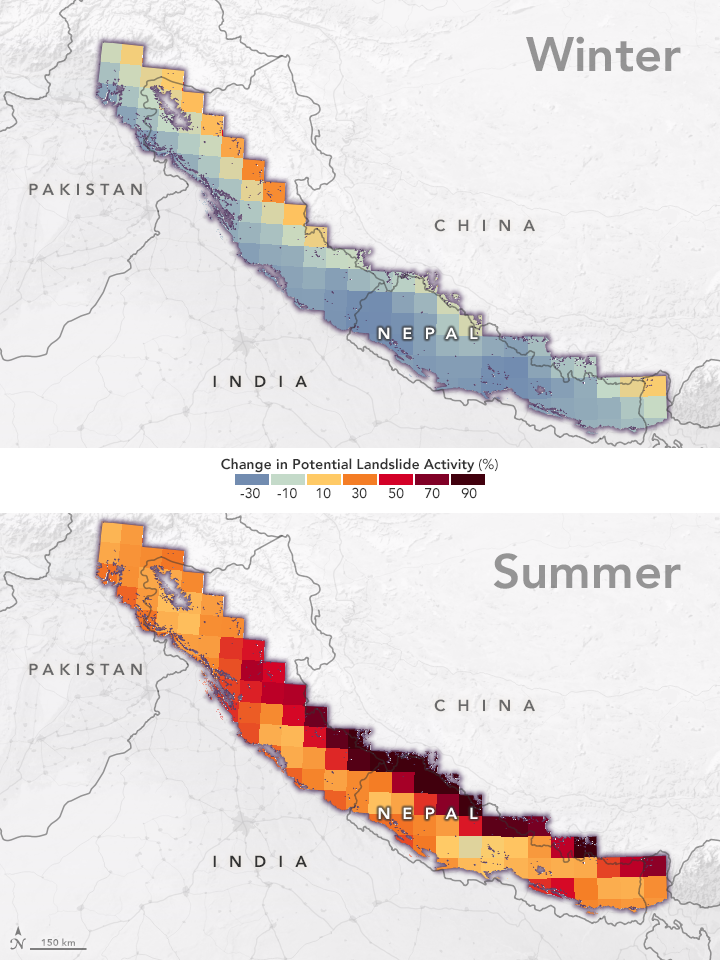 As Earth’s climate has warmed, the water cycle in these rugged, glacier-covered mountains has been changing, with subtle shifts in annual monsoon rainfall patterns. Heavy rainfall on the steep terrain can trigger landslides that cut off water supplies and transportation networks and occasionally destroy villages and towns with flash floods. In the summer of 2019, for instance, monsoon flooding and landslides in Nepal, India, and Bangladesh temporarily displaced more than seven million people.

In order to predict how climate change might affect landslides, researchers need to know what future rainfall events might look like. But until now, landslide predictions have relied on records of past landslides or general precipitation estimates.

“Other studies have either addressed this relationship very locally, or by adjusting the precipitation signal in a general way,” said Dalia Kirschbaum, a landslide and precipitation researcher at NASA’s Goddard Space Flight Center and lead author of the study. “Our goal was to demonstrate how we could combine global model estimates of future precipitation with our landslide model to provide quantitative estimates of potential landslide changes in this region.”

The research team used a model that estimates the potential landslide activity triggered by rainfall. Known as the Landslide Hazard Assessment for Situational Awareness (LHASA), the model assembles information about roadways, the presence or absence of tectonic faults, the types of bedrock, changes in tree cover, and the steepness of slopes. Then it integrates precipitation data from the Global Precipitation Measurement mission. If the amount of precipitation in the preceding seven days has been abnormally high in an area, then the potential occurrence of landslides increases.

The study team first ran LHASA using NASA precipitation data collected from 2000 to 2019 and then with NOAA climate model data from 1982 to 2017. They compared the results from both data sets to NASA’s Global Landslide Catalog, which documents landslides reported by the media and other sources. Retrospective predictions based on both data sets matched up favorably with real events in the landslide catalog, giving the team confidence that their models of future precipitation would yield accurate forecasts. The team then used NOAA’s model data to take LHASA into the future, projecting precipitation and landslide trends for 2061–2100.

Kirschbaum and colleagues found that extreme precipitation events are likely to become more common in the future, and in some areas this may lead to a higher frequency of landslides. In particular, they noted that the border region of China and Nepal could see a 30 to 70 percent increase in landslide activity. The combined impacts of more intense rainfall and warmer air temperatures could affect the delicate balance of glaciers and glacial lakes in the area, releasing flash floods.

The full human impact of increasing landslide risk will depend on how climate change affects glaciers and how populations and communities change. The modeling work and scientific lessons from High Mountain Asia should also be useful in other regions of the world.

“Our hope is to expand our research to other areas of the world with similar risks of landslides, including Alaska and Appalachia in the United States,” said Sarah Kapnick, a physical scientist at NOAA’s Geophysical Fluid Dynamics Laboratory and co-author on the study. “We’ve developed a method, figured out how to work together on a specific region, and now we’d like to look at the U.S. to understand what the hazards are now and in the future.”