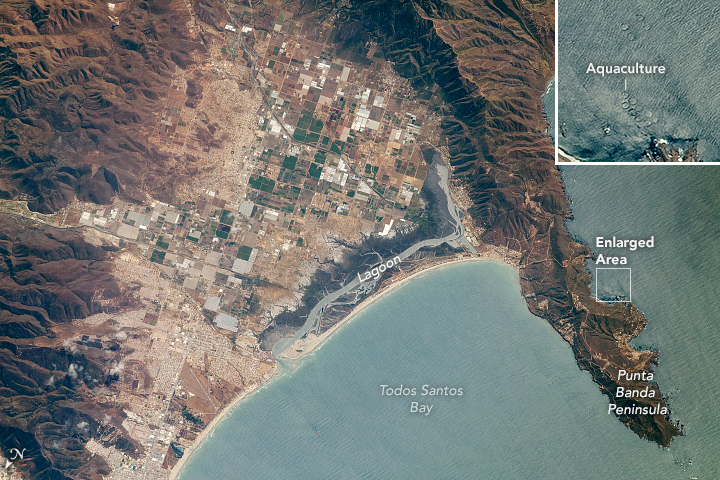 This photograph, taken by an astronaut onboard the International Space Station, captures a short section of coastline on the west coast of Baja California, Mexico. Small developed areas are interspersed among sections of farmland in a valley bounded by minor mountain ranges. The city of Ensenada, a major port and tourist destination, lies just beyond the bottom left corner of the image.

The fishing industry is an integral part of the economy for this region. Pacific Bluefin tuna is one of the important species locally. A series of fish farming pens also appear along the east side of the peninsula. (The inset image offers a zoomed look at one of the aquaculture facilities.)

Punta Banda Peninsula reaches out to form the southern limit of Todos Santos Bay (All Saints Bay). The temperate conditions that make this region productive for fishing also provide attractive conditions for Pacific gray whales as they migrate south from their feeding grounds to give birth in the protected bays and estuaries of Baja California.

The lagoon (image center) and the bay coastline have been affected by erosion in recent years due to a combination of natural processes, a reduced sediment supply to the bay and, increasingly, urban growth and increased tourism.

Astronaut photograph ISS059-E-36214 was acquired on April 27, 2019, with a Nikon D5 digital camera using an 800 millimeter lens and is provided by the ISS Crew Earth Observations Facility and the Earth Science and Remote Sensing Unit, Johnson Space Center. The image was taken by a member of the Expedition 59 crew. The image has been cropped and enhanced to improve contrast, and lens artifacts have been removed. The International Space Station Program supports the laboratory as part of the ISS National Lab to help astronauts take pictures of Earth that will be of the greatest value to scientists and the public, and to make those images freely available on the Internet. Additional images taken by astronauts and cosmonauts can be viewed at the NASA/JSC Gateway to Astronaut Photography of Earth. Caption by Laura Phoebus, Jacobs Technology, JETS Contract at NASA-JSC.

Fishing is an integral part of the economy for this region, which also attracts whales and tourists. 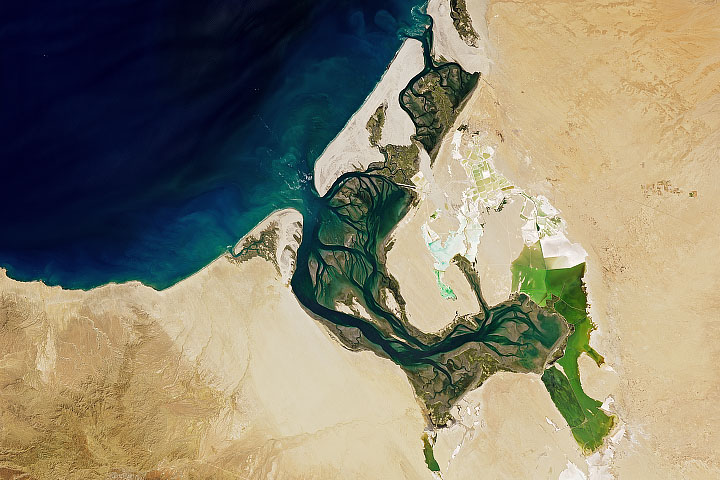