Editor’s note: This story is the answer to our August 2019 puzzler.

Every summer, vast expanses of the Canadian prairie in Saskatchewan, Alberta, and Manitoba turn a bright shade of yellow. The reason: canola fields reaching peak bloom.

The Moderate Resolution Imaging Spectroradiometer (MODIS) on NASA’s Terra satellite captured this image (above) of yellow-tinged fields stretching across the three provinces on July 22, 2019. A day later, the Operational Land Imager (OLI) on Landsat 8 acquired a more-detailed view of canola (below) in bloom near Regina, Saskatchewan. 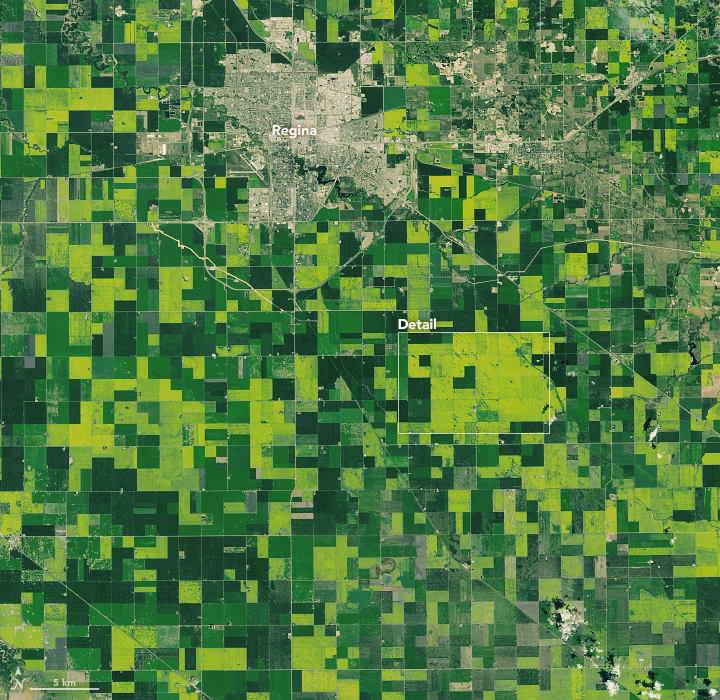 Canola, a cultivar of rapeseed, is a member of the Brassica family, which includes cabbages and mustards. After flowering, canola plants produce brown oil-rich seeds that are about the size of poppies. When ground up, these seeds yield an oil that is widely used for cooking and high-protein meal used in animal feed.

According to the Canada Canola Association, Canadian farmers began to grow rapeseed during World War II to produce an inedible oil that was used as a lubricant in steam engines. In the decades following the war, Canadian plant breeders developed new varieties of rapeseed that had much lower levels of glucosinolates and erucic acids—undesirable substances that made rapeseed products taste bad or were thought to cause health problems. In 1978, the Western Canadian Oilseed Crushers trademarked these “double low” rapeseeds as canola (shorthand for Canadian oil, low acid). 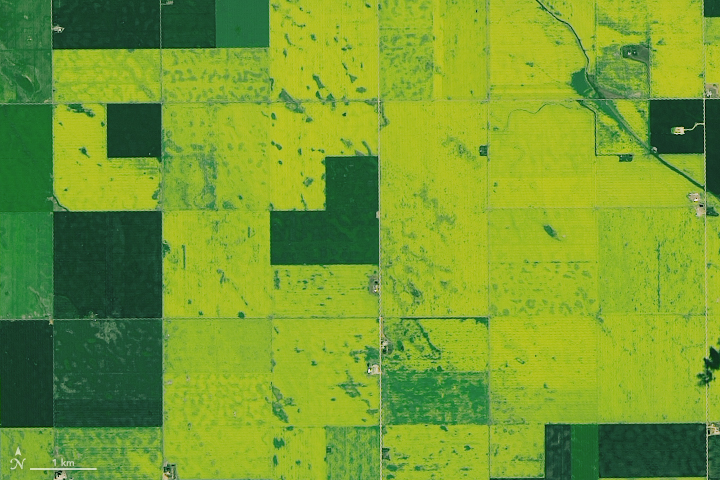 In recent decades, canola has become a cash crop for Canada, with much of the harvest getting exported. Since the mid-1980s, the footprint has spread significantly, with the total canola-growing area increasing by more than threefold, with particularly fast growth in Saskatchewan. The biggest importer of canola oil and meal is the United States, accounting for about 52 percent of oil exports and 69 percent of meal exports in 2018, according to the Canadian Canola Association.