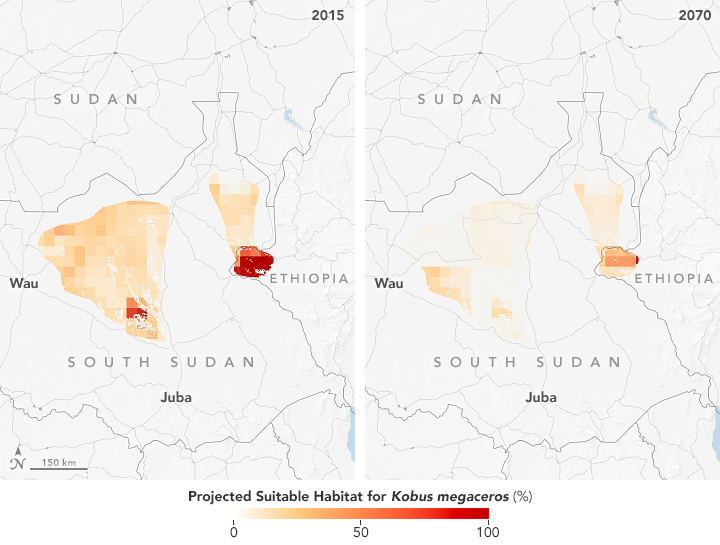 In 1983, around 40,000 Nile lechwes (Kobus megaceros) roamed South Sudan and eastern Ethiopia. By 2060, this endangered population of African antelope may be on the brink of extinction. The cause? Loss of wild habitat.

This antelope is just one of hundreds of species that may be imperiled in the next four to five decades, according to a recent NASA-funded study. Researchers from Yale University examined the habitats of 19,400 species to learn how they might be affected by human land-use and encroachment, such as urban development and deforestation. They found that habitats for nearly 1,700 bird, mammal, and amphibian species are expected to shrink about 6 to 10 percent per decade by 2070, greatly increasing the risk of extinction for these animals.

“We all want to see economic progress and development, and that necessarily implies further human-induced changes to landscapes,” said Walter Jetz, co-author of the study and professor of ecology at Yale. “But unless potential impacts of this land use on biodiversity are known and addressed in some form, the long-term consequences could lead to species forever lost for future generations.”

The maps on this page show the potential decrease of suitable habitats for two vulnerable species. The map above shows the habitat change for the Nile lechwes from 2015 (left) to 2070 (right). The antelope species could lose approximately 70 percent of its suitable habitat and become “critically endangered” by 2070.

The map below shows the habitat of Oreophryne monticola, a frog endemic to Indonesia. The frog is currently listed as “endangered” and is predicted to lose more than 50 percent of its habitat in Lombok and Bali by 2070. 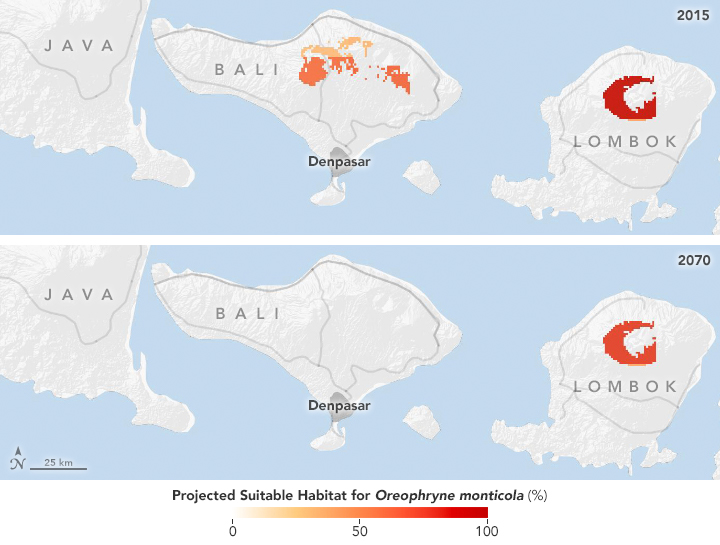 “If a country is projected to see a lot of change of swamps or forest to agriculture, this a good predictor that some species in that area are in jeopardy,” said Jetz. “That doesn’t mean these species are necessarily going to go extinct, but they are going to be put under pressure.”

According to the study, amphibians will be the most affected by human land use, followed by birds and mammals. Geographically, species living in South America, Southeast Asia, Central and East Africa, and Mesoamerica are expected to experience the most habitat loss and the greatest increase of extinction risk.

To make these predictions, Jetz and co-author Ryan Powers created a model that allowed them to analyze 2015 habitat conditions of about 19,400 species under anticipated changes in land-use in these areas.

The researchers then ran a model combining this habitat suitability information with future land-cover projections from the Land Use Harmonization data set in order to estimate decadal changes from 2015 to 2070. They ran the numbers under four different socioeconomic scenarios that would bring variations in land use. (The maps on this page show the “middle-of-the-road” economic scenario and assume no land will be recovered once destroyed.) Even in the best cases, many species are predicted to experience habitat losses by 2070.

“Even though we might see certain losses into the future no matter what we do,” said Jetz, “we can adjust to have the greatest chance of preserving life.” The study could help future conservation efforts by local, national, and international organizations.

The research by Jetz and Powers feeds into an initiative called the Map of Life, a NASA-funded public web platform designed to integrate large amounts of biodiversity and environmental data from researchers and citizen scientists. The global database aims to support a worldwide monitoring of species distributions.