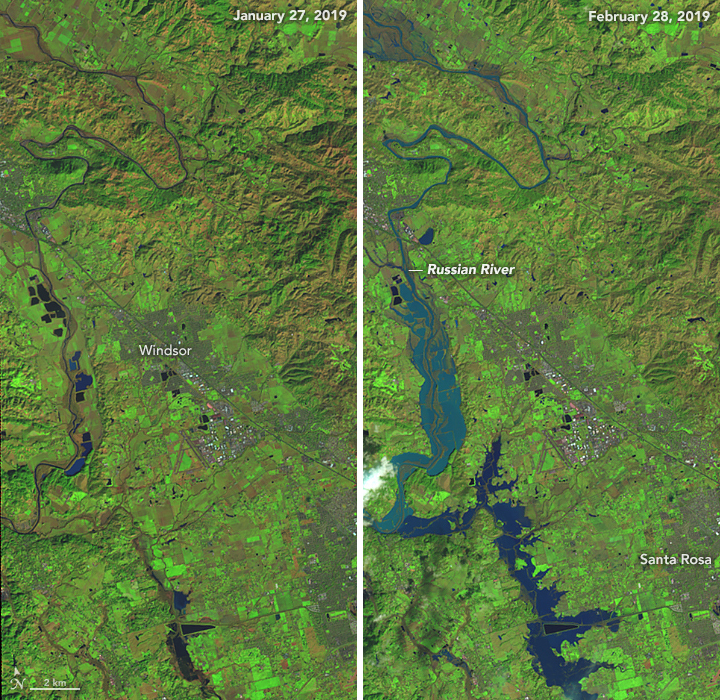 As another round of severe rainstorms doused California in late February 2019, the Russian River approached record levels and brought catastrophic flooding. More than 2,000 businesses and homes in Sonoma County were flooded and the river valley towns of Guerneville and Monte Rio were turned into islands, temporarily cut off from all land transportation.

Scientists from the National Weather Service and the Scripps Institution of Oceanography declared an atmospheric river event, one of several that has brought soaking rain and heavy snowfall to California this winter. Off the West Coast of the United States, an atmospheric river is often referred to as a “pineapple express,” because the storm systems and moisture often flow from the tropical Pacific near Hawaii. Such jets of moist air can run into low-pressure weather systems and deliver bursts of precipitation for days at a time.

On February 28, 2019, the Operational Land Imager on Landsat 8 acquired a false-color view (bands 6-5-4) of flooding along the Russian River. It shows flood water west of Santa Rosa, near a point where the river takes a hard turn to the west toward Sebastopol and Guerneville (both under cloud cover). For comparison, the left image shows the area on January 27, 2019. Flood waters appear blue; vegetation is green; and bare ground is brown.

On February 28, the Moderate Resolution Imaging Spectroradiometer (MODIS) on NASA’s Aqua satellite acquired a natural-color image of a sediment plume pouring out from the Russian River into the Pacific Ocean. 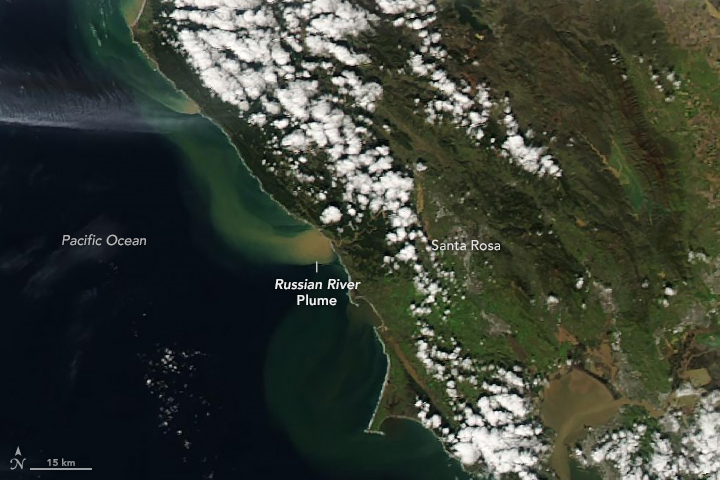 Meteorologists reported widespread rainfall totals above 5 inches (13 centimeters), with the town of Venado, California, seeing 21.36 inches (54.25 cm) in 48 hours. According to a report from NBC Bay Area meteorologist Jeff Rainieri, the mountains around Guerneville saw February rainfall that was more than 400 percent of normal. The Russian River crested at 45.38 feet (about 14 meters) in Guerneville, the highest level since 1995.

According to The San Jose Mercury News, the town of Guerneville has flooded 38 times since 1940. Once the site of timber-cutting operations, the town sits on a flood plain amidst redwood-covered mountains of the Coastal Range. 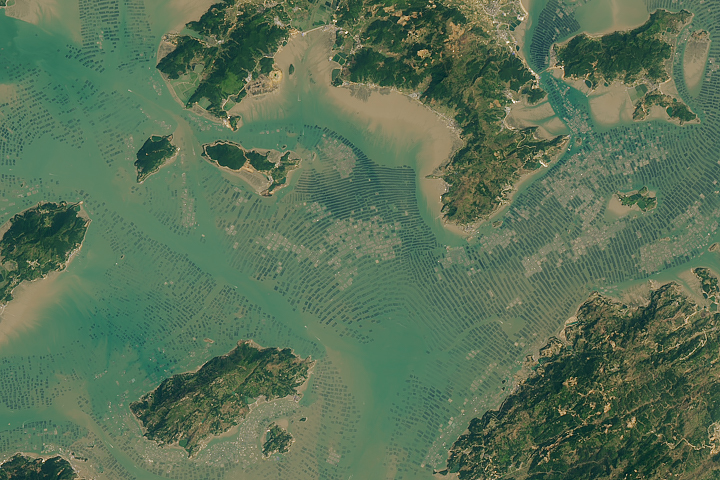