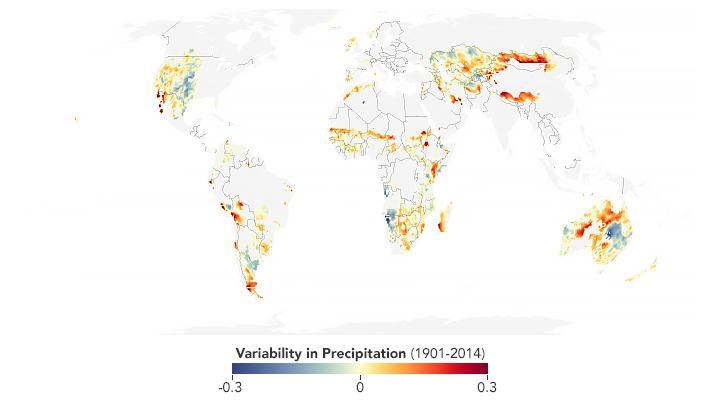 From open savannas in Africa to grassy pastures in North America, more land is used for livestock grazing than any other human activity on Earth. Grazing lands provide food and economic security for nearly 800 million people worldwide, but new research shows that these vital lands are sensitive to variations in climate—specifically, changes in precipitation.

Over the past century, almost half of the world's grazing lands have experienced fluctuations in the amount of year-to-year precipitation, according to a study led by researchers at the University of Minnesota (UMN). These precipitation swings—ranging from droughts to deluges—take a toll on grazing land vegetation, reducing the ability to sustain large cattle populations.

“There are many places around the world where livestock is very important for food security and people's livelihoods.” said Paul West, lead scientist of UMN’s Global Landscapes Initiative. “We found that overall health of pastures is tightly tied to the variability of precipitation.”

The map above shows year-to-year variability in precipitation around the world over the past century, based largely on data from the Climatic Research Unit. Forty-nine percent of pasture lands experienced large rainfall fluctuations in that span. Red areas experienced more rainfall variability, whereas blue areas had less variability (more stability). Overall, grazing lands saw about 25 percent more year-to-year fluctuations in precipitation than the average land surface (excluding Antarctica).

In general, grazing lands are already marginal for producing food. They are often too arid or have poor soil for crop growth. Additional stress can make the land unusable. “If they are already at a make-or-break point, and you have this occasional shock in the system, it can tip a place over from productive to unproductive,” said West.

Large swaths of vulnerable grazing areas appear in Argentina, southern and eastern Africa, central Asia, western and southwestern North America, and Australia. As it turns out, many of these areas also have high market influence (determined by the accessibility to market locations and personal purchasing power, derived from national level gross domestic product). 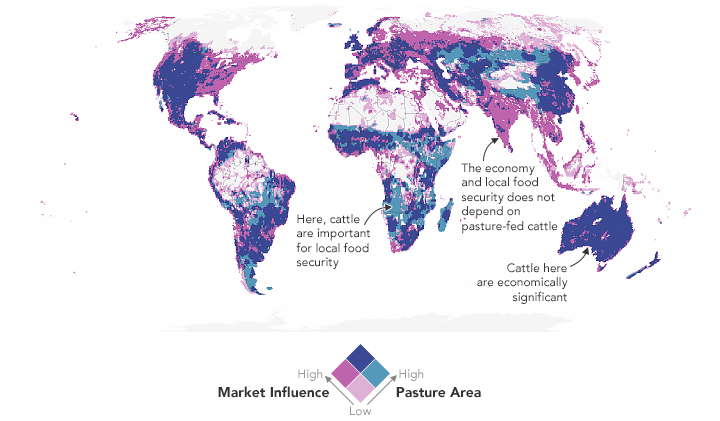 The second map shows areas where pasture-grazed cattle are key for local food security and the economy. The University of Minnesota team found that precipitation variability has been highest in regions where livestock grazing is important. Data for the pasture area comes from the Moderate Resolution Imaging Spectroradiometer (MODIS) on NASA’s Terra satellite from 2010. The data was combined with livestock data from the global livestock production systems from 2011.

As grazing lands become increasingly vulnerable due to climate change, cattle ranchers and other livestock farmers will need to adapt to the unstable rainfall. For example, Australia has seen more frequent intense dry and wet periods due to El Niño and La Niña events and tropical cyclones. Farmers and ranchers in Australia have started to reduce their cattle herds, and they sometimes delay restocking animals after droughts to allow time for pastures to recover. Others are looking into supplemental feeds for livestock.

“Basically, if we want to get the most out of the land, grazing systems will need to adapt to increased climate variability,” said Sloat. “We need to use these marginal grazing lands sustainably and efficiently to prevent future agricultural expansion and associated deforestation.”

Fluctuations in rainfall are reducing the ability to sustain cattle on grazing lands.