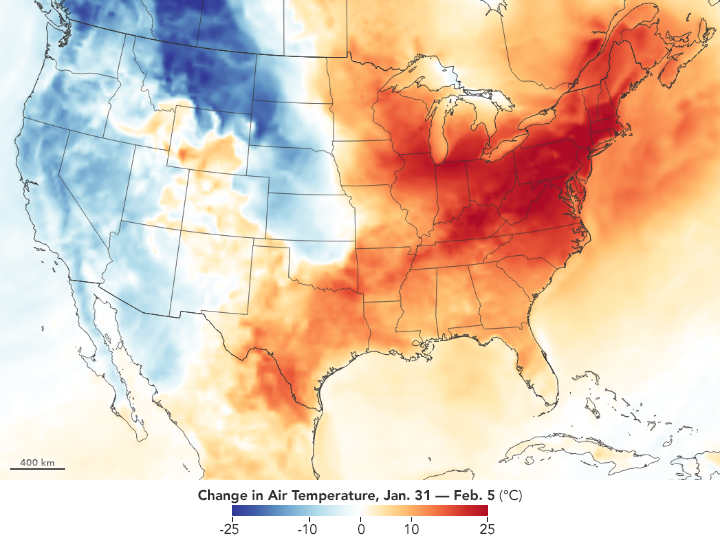 The bitter cold that gripped the middle and eastern portion of the United States in late January 2019 is gone. Unseasonably warm air arrived in early February, sending temperatures soaring to record daily highs in some eastern cities.

The dramatic swing is visible in the map above, which shows the change in air temperatures between 1 p.m. Eastern Standard Time on January 29, 2019, and 1 p.m. EST on February 5. The map was derived from the Goddard Earth Observing System (GEOS) model, and represents air temperatures at 2 meters (about 6.5 feet) above the ground. The darkest red areas represent a jump in temperature by as much as 25 degrees Celsius (45 degrees Fahrenheit).

Measurements reported by the National Weather Service show that the daily high temperature in Boston jumped 26°C (47°F) between January 29 and February 5. New York and Washington D.C. warmed warmed by about 27°C. The warm weather pattern was expected to continue through most of the week, before cooling to near average for the time of year.

Meanwhile, parts of the U.S. west saw temperatures drop—cold enough for precipitation from a series of storms to fall as snow in many areas, including an unusual dusting of white on peaks in the San Francisco Bay Area and vineyards in Napa Valley.

The bitter cold that gripped the eastern half of the United States has been replaced by record-warmth.