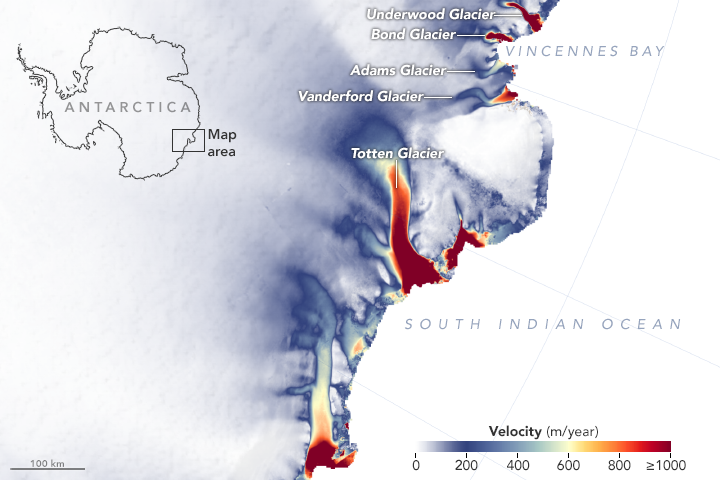 If the thick ice cover over East Antarctica were to melt, it would reshape coastlines around the world through rising sea levels. But scientists have long considered the eastern half of the continent to be more stable than West Antarctica. Now new maps of ice velocity and elevation show that a group of glaciers spanning one-eighth of the East Antarctic coast have been losing some ice over the past decade.

Glaciologists have warned in recent years that Totten Glacier—the fastest moving ice in East Antarctica—appears to be retreating due to warming ocean waters. Totten contains enough ice to raise sea level by at least 3.4 meters (11 feet). Researchers have now found that four glaciers to the west of Totten, plus a handful of smaller glaciers farther east, are also losing ice.

“Totten is the biggest glacier in East Antarctica, so it attracts most of the research focus,” said Catherine Walker, a glaciologist at NASA’s Goddard Space Flight Center. “But it turns out that other nearby glaciers are responding in a similar way to Totten.”

Walker and colleagues found that the surface height of four glaciers west of Totten, in an area facing Vincennes Bay, has dropped by an average of nearly three meters (9 feet) since 2008. (There had been no measured change in elevation for these glaciers before then.) To the east of Totten, the surfaces of some glaciers along the Wilkes Land coast have dropped by 0.25 meters (0.8 feet) per year since 2009, about double their previous rate.

Such levels of ice loss are small when compared to those of glaciers in West Antarctica. But still they speak of nascent and widespread change in East Antarctica.

“This change doesn’t seem random; it looks systematic,” said Alex Gardner, a glaciologist with NASA’s Jet Propulsion Laboratory. “And the systematic nature hints at underlying ocean influences that have been incredibly strong in West Antarctica. Now we might be finding clear links of the ocean starting to influence East Antarctica.”

The maps on this page show the velocity of outlet glaciers along the coasts of Antarctica, as measured between 2013 to 2018 in thousands of Landsat images. The image at the top of the page focuses on the area around Totten Glacier that was studied by Walker, while the continental view provides the wider context. (Note that the white hole in the middle of the continental map is an area not reached by Landsat satellites.)

Walker combined simulations of ocean temperature with actual measurements from sensor-tagged marine mammals and Argo floats. She found that recent changes in winds and sea ice have resulted in an increase in the amount of heat delivered by the ocean to the glaciers in Wilkes Land and Vincennes Bay.

“Those two groups of glaciers drain the two largest subglacial basins in East Antarctica, and both basins are grounded below sea level,” Walker said. “If warm water can get far enough back, it can progressively reach deeper and deeper ice. This would likely speed up glacier melt and acceleration, but we don’t know yet how fast that would happen. Still, that is why people are looking at these glaciers, because if you start to see them picking up speed, that suggests that things are destabilizing.”

There is a lot of uncertainty about how a warming ocean might affect these glaciers because the area is so remote and poorly explored. The principal unknowns are the topography of the bedrock below the ice and the bathymetry (shape) of the ocean floor in front of and below the ice shelves. Both govern how waters circulate near the continent and bring warm ocean currents to the ice front. 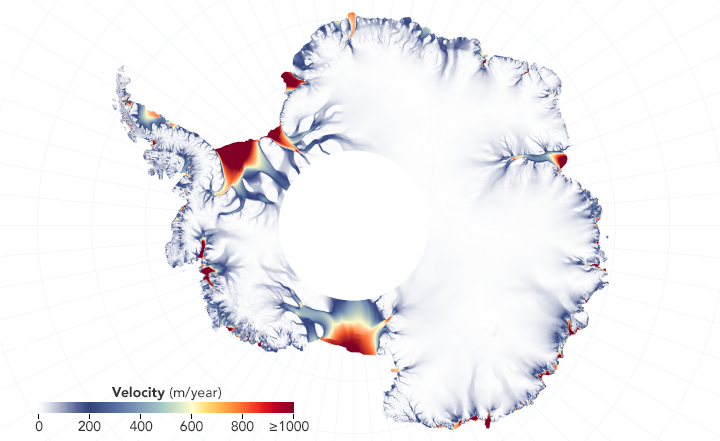 Gardner and colleagues have been creating new maps of ice velocity and surface height elevation as part of a NASA project called Inter-mission Time Series of Land Ice Velocity and Elevation, or ITS_LIVE. The new initiative is using new computing tools and multiple satellite missions to assemble a 30-year record of changes in the surface elevation of glaciers, ice sheets, and ice shelves, and a detailed record of variations in ice velocity.