Ozone Hole is Big, But Tempered by CFC Reductions 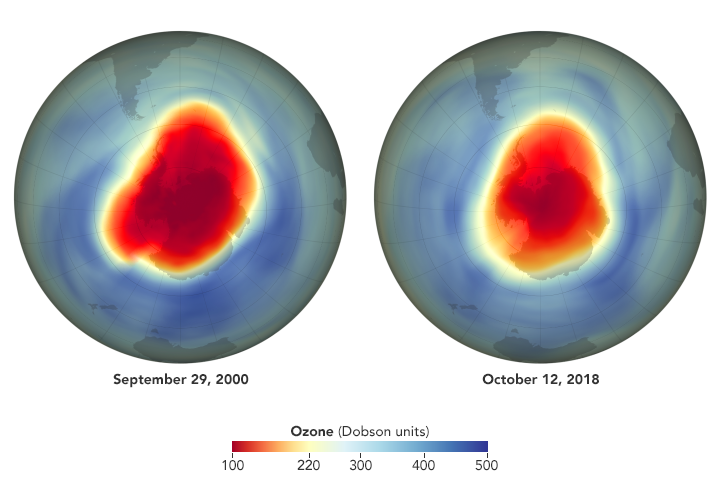 The hole in the ozone layer that forms over Antarctica each September and October was slightly above average size in 2018, but smaller than expected for the weather conditions. Colder-than-average temperatures in the Antarctic stratosphere created ideal conditions for destroying ozone, NASA and NOAA scientists said, but declining levels of ozone-depleting chemicals prevented the hole from growing as large as it might have been 20 years ago.

“Chlorine levels in the Antarctic stratosphere have fallen about 11 percent from the peak year,” said Paul A. Newman, chief scientist for Earth Sciences at NASA’s Goddard Space Flight Center. “This year’s colder temperatures would have given us a much larger ozone hole if chlorine was still at levels we saw back in the year 2000.”

The ozone hole reached an average area of 22.9 million square kilometers (8.8 million square miles) in 2018, almost three times the size of the contiguous United States. It ranks 13th largest out of 40 years of NASA satellite observations. 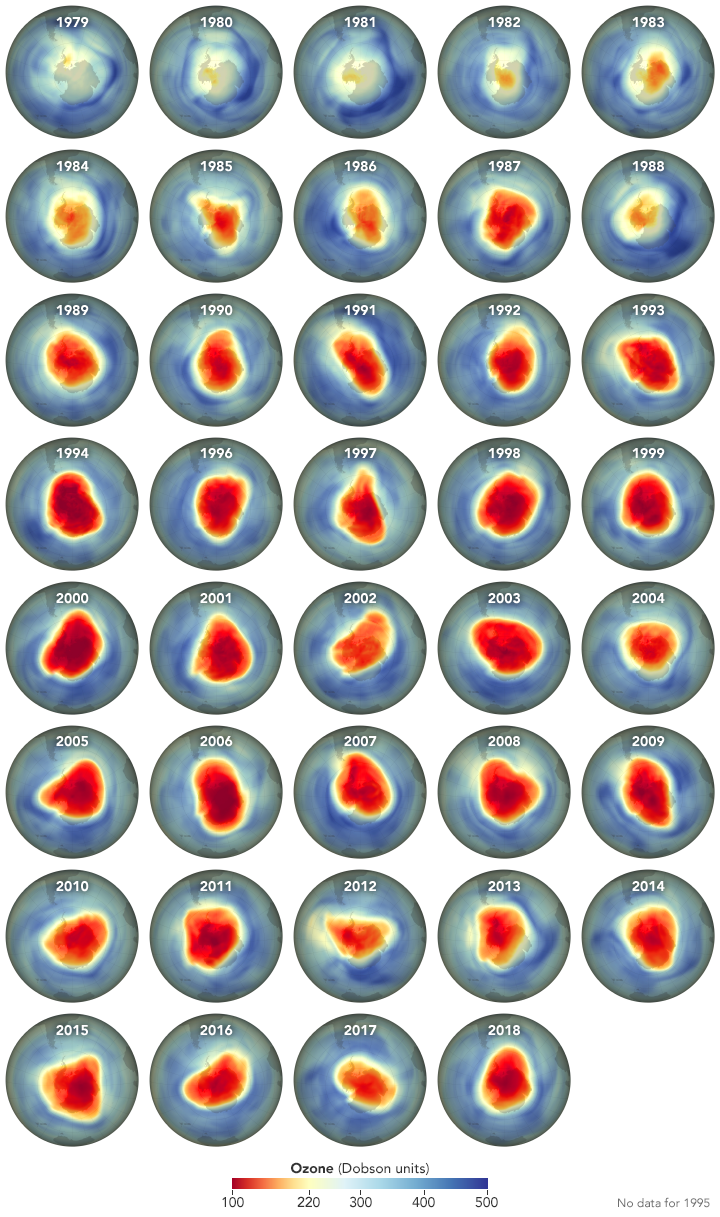 Stratospheric ozone is measured in Dobson units (DU), the number of molecules required to create a layer of pure ozone 0.01 millimeters thick at a temperature of 0 degrees Celsius and an air pressure of 1 atmosphere (the pressure at the surface of the Earth). The average amount of ozone in Earth’s atmosphere is 300 Dobson Units, equivalent to a layer 3 millimeters (0.12 inches) thick, about the height of 2 pennies stacked together.

The ozone hole in 2018 was strongly influenced by a stable and cold Antarctic vortex, the stratospheric low-pressure system that flows clockwise in the atmosphere over the continent. These colder conditions—among the coldest since 1979—helped support the formation of more polar stratospheric clouds. Particles in such clouds activate ozone-destroying forms of chlorine and bromine compounds in the stratosphere.

The ozone hole was quite large in 2018 because of the cold conditions, but less severe than it might have been in previous decades. The difference is a long-term reduction in ozone-depleting substances (such as chlorofluorocarbons, or CFCs) that were phased out of commercial production by the Montreal Protocol. Atmospheric levels of CFCs and similar compounds increased up to the year 2000, but have slowly declined since then.

Ozone-depleting chemicals in the air are abundant enough to cause significant losses. According to NOAA scientist Bryan Johnson, conditions in 2018 allowed for a significant elimination of ozone in a deep, 5-kilometer (3.1-mile) layer over the South Pole. The South Pole saw an ozone minimum of 104 Dobson units on October 12, making it the 12th lowest year out of 33 years of ozonesonde (balloon) measurements at the Pole.

“Even with this year’s optimum conditions, ozone loss was less severe in the upper altitude layers,” Johnson said, “which is what we would expect given the declining chlorine concentrations we’re seeing in the stratosphere.”

The hole in the ozone layer over Antarctica was slightly above average size in 2018, but smaller than expected for the weather conditions.