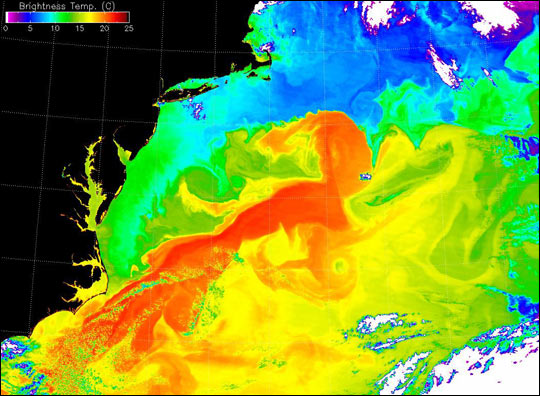 On May 2, 2001, the Moderate-resolution Imaging Spectroradiometer (MODIS) obtained this spectacular image of the Atlantic Ocean's Gulf Stream. The false colors in the image represent "brightness temperature" observed at the top of the atmosphere. The brightness temperature values represent heat radiation from a combination of the sea surface and overlying moist atmosphere.

The red pixels in this image show the warmer areas (approaching 25°C), greens are intermediate values (12-13°C), and blues are relatively low values (less than 10°C). Notice the considerable detail in the swirls and gyres of the current patterns in the Gulf Stream.

This image was produced using MODIS' detectors that are sensitive to the 11-micron wavelength. Brightness temperature is actually a measure of the photons at this wavelength received by the spacecraft, but presented in units of temperature (Celsius). Since the atmospheric water vapor emits photons at this wavelength in addition to those emitted by the underlying sea surface, what you are actually seeing is a combination of both. Thin clouds and water vapor at higher altitudes appear as cooler areas.

Heat is being released into the overlying atmosphere from the ocean, raising the humidity. This image depicts the complex interaction of the sea with the atmosphere.

These images were produced from data collected and processed by the University of Wisconsin-Madison's MODIS direct broadcast receiving station. The MODIS sensor flies aboard NASA's Terra spacecraft, launched in December 1999.