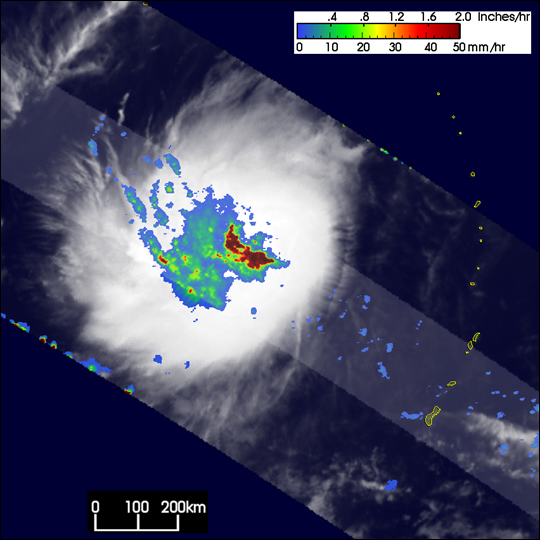 As the northern Philippines island of Luzon recovers from its brush with Typhoon Mindulle, the island nation of Taiwan now bears the brunt of the storm. Mindulle was responsible for 16 fatalities and 17 missing persons in the Philippines mainly from flash floods and is now hitting the east coast of Taiwan with 75 mph winds. Mindulle formed into a tropical depression from a monsoon gyre back on the 23rd of June 2004 just west of the Northern Mariana Islands. Mindulle quickly reached tropical storm strength but only slowly intensified over the next few days before finally becoming a minimal typhoon on the 27th in the Philippine Sea. Next came a period of rapid development as Mindulle's maximum sustained winds increased from 65 knots (75 mph) to 125 knots (144 mph) within a span of just 30 hours, and it's forward speed decreased dramatically as it approached the northern Philippines. Up until this point, Mindulle had been moving mainly due west but now turned north taking it through the Babuyan and Batan islands north of the main island of Luzon. The storm increased its forward speed slowly and began to weaken as it passed through the Bashi Channel headed for Taiwan. Mindulle passed by the Hengchun Peninsula at the southern tip of Taiwan on the evening (local time) of the 30th of June before continuing up along the east coast of Taiwan.

The Tropical Rainfall Measuring Mission (TRMM) satellite has been fulfilling its mission of monitoring rainfall over the global tropics since its launch back in November of 1997. With its passive and active sensors, TRMM is able to capture unique images of tropical cyclones providing a one of a kind perspective on their structures as seen by this series of images of Mindulle. The first image was taken at 15:39 UTC on 23 June 2004 when Mindulle was still just a tropical storm west of the Northern Mariana Islands with maximum sustained winds estimated at 35 knots (40 mph) by the Joint Typhoon Warning Center. The image shows the horizontal distribution of rain intensity. Rain rates in the center swath are from the TRMM Precipitation Radar (PR), the first and only precipitation radar in space, and those in the outer swath are from the TRMM Microwave Imager (TMI). The rain rates are overlaid on infrared (IR) data from the TRMM Visible Infrared Scanner (VIRS). This image shows that Mindulle is not very organized yet with no evidence of an eye in the rain field. However, some banding is visible in the moderate rain rates (green areas) and a sizeable area of intense rain is present (dark red areas). The second image was taken at 06:01 UTC on the 28th and shows a mature typhoon with a large, well- defined eye surrounded by a definitive eyewall that contains areas of heavy rain (semicircle with dark red areas). At this time Mindulle was a Category 4 storm with sustained winds estimated at 115 knots (132 mph) as it was approaching the the the northern Philippines. The next image at this same time shows a vertical cross section through the center of the storm from the PR looking northeast. It shows the intense rain (black area) in the western eyewall and a broad rain shield of moderate intensity rain (yellow areas) west of the center. Also evident is a bright band (horizontal yellow areas) wherein ice particle begin to melt as they fall through the freezing level. The final image was taken at 4:51 UTC on 1 July 2004. It shows a greatly weakened Mindulle hugging the east coast of Taiwan. The eyewall is gone and the center is surrounded by a large swirl of mostly light rain (blue areas). The heaviest rain rates are part of a large rain band that extends southwest of the center into the northern South China Sea. At this time, the maximum estimated winds were down to 75 knots (86 mph).

The Tropical Rainfall Measuring Mission captured this sequence of images of Typhoon Mindulle between June 23 and July 1, 2004.