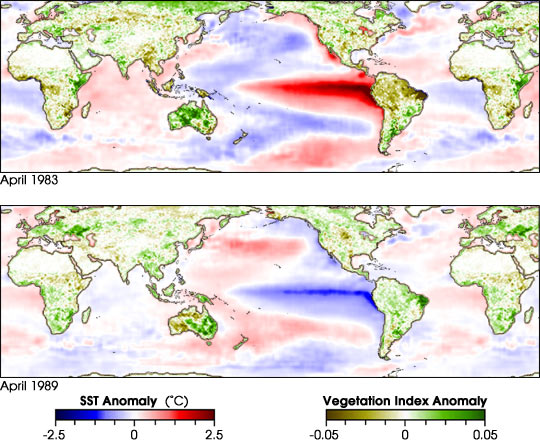 These global-scale, false-color images represent data collected by the NOAA Advanced Very High Resolution Radiometer (AVHRR) sensor and composited for the months of April 1983 and April 1989, respectively. Over the oceans, the colors represent sea surface temperature anomaly--reds show higher than average temperatures, blues are lower than average, and white is average. On land, the colors represent anomalously high or low production of green foliage (also known as vegetation index)--greens represent anomalously high productivity and browns show areas of anomalously low productivity. These images demonstrate that there is a relationship between sea surface temperature and vegetation productivity.

Note that in April 1983, there was a large El Niño in the equatorial Pacific Ocean, whereas the Southern Atlantic was cooler than average. Much of the continent of South America was experiencing drought or drier than normal conditions, reflected by the low vegetation index values (brown pixels) at that time. Along the equator, winds tend to blow from east to west, helping transport moisture and rain clouds inland. Yet, because water evaporates much less readily from a cooler sea surface than from a warmer one, the trade winds brought very little precipitation from the Southern Atlantic to South America at this time. Conversely, at higher latitudes in both the Northern and Southern Hemispheres, winds tend to blow from west to east. Notice the effects of the anomalously warm sea surface on both North America and Australia during this month. The large pocket of warm water off the west coast of North America contributed to unusually high rainfall over the arid regions of Southern California and New Mexico, helping to spawn temporary grasslands where there is typically desert. Notice also how the large region of anomalously warm water in the Indian Ocean contributed to extensive greening across the typically dry Australian outback.

In contrast, April 1989 was a La Niña year in the equatorial Pacific and the Southern Atlantic was warmer than average. Many of the signals described in the previous paragraph appear to be reversed in this later image. For instance, the warm Atlantic waters are feeding more moisture than usual into the overlying atmosphere, which was eventually precipitated across South America, hence the greener than average landscape. However, the large pocket of cool water off the west coast of North America contributed to drought in the Great Plains region. There was also extensive drying across northern Australia as much of the Indian Ocean was cooler than normal.

The Return of El Niño