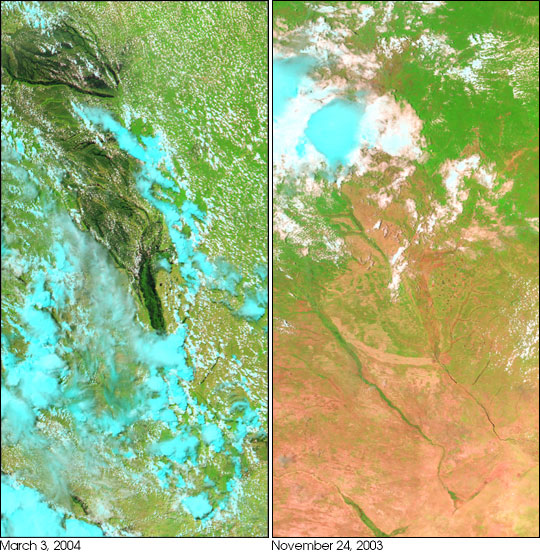 Every year as the rainy season draws to a close, the Zambezi River pushes over its banks along its upper reaches in Zambia. Flooding is way of life to local tribes who regularly move to higher ground during the rainy season, but this year is proving to be worse than normal. Last year’s floods displaced over 10,000 people in late March. This year, the river is already higher than it was last year, and people in Namibia’s Caprivi Strip, downstream, are bracing for serious floods. Some villages are already surrounded by water. Record rainfall in January and continued heavy rain in February is to blame for the higher-than-average flood water in the Zambezi.

The above Moderate Resolution Imaging Spectroradiometer (MODIS) images provide a contrast between the dry season, November 24, 2003, and the wet season, March 3, 2004. Only a thin dark line marks the location of the river during the dry season, while black puddles show the river’s extent during the wet season. In these false-color images, plants are green, bare land is tan, and clouds are white and light blue.