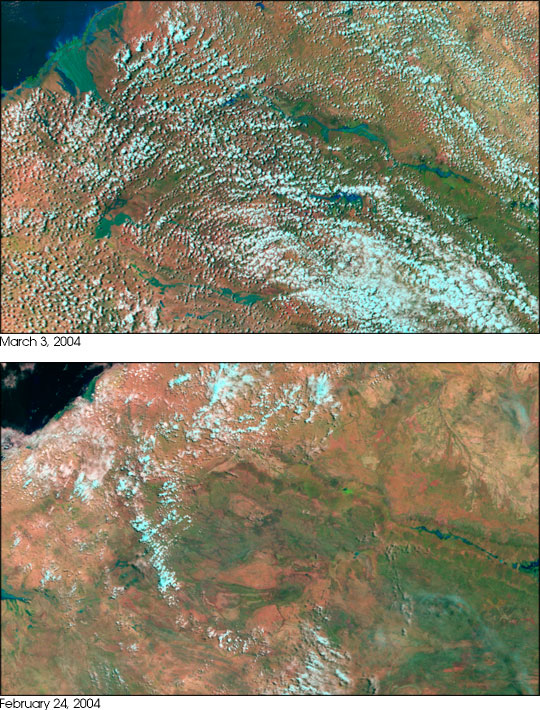 Tropical Cyclone Monty brought heavy rain to drought-stricken regions of Western Australia. While welcome, the rain pushed the Fortescue River over its banks, cutting off a few small communities and isolated homesteads in the rural area. These false-color Moderate Resolution Imaging Spectroradiometer (MODIS) images show the Fortescue River on February 24, 2004, before Monty came ashore, and on March 3, just after the cyclone moved across the area. Blue-green streaks in the image taken on March 3 show where water covers the land. The Fortescue River appears particularly flooded near the coast, where a large fan shape has replaced the slender line water running into the Indian Ocean.

Images courtesy Jesse Allen, based on data from the MODIS Rapid Response Team at NASA GSFC (March 3) and the EOS Data Pool (February 24).

The DeGrey River flows west through Western Australia before it turns north to empty into the Indian Ocean at Poissonnier Point east of the city of Port Hedland, the city most severely damaged by Cyclone George. On March 6, before both storms struck, the river was barely distinguishable in MODIS imagery. One week later, the river and its many tributaries cut a tangle of blue across the landscape.