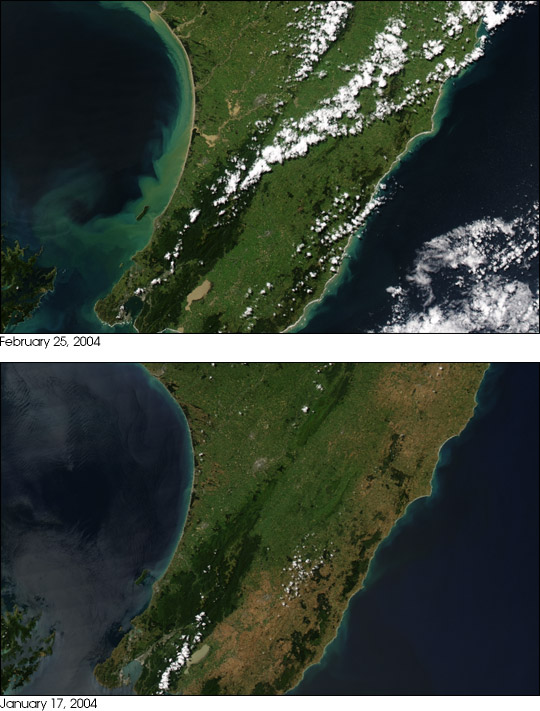 The flood waters had largely receded on New Zealand’s North Island when the clouds cleared away on February 25, 2004, and the Moderate Resolution Imaging Spectroradiometer (MODIS) on the Aqua satellite captured this image. Only a few muddy pools of standing water and swollen rivers, not present in an image taken on January 17, remain in what was the worst flood to strike the area in 100 years. Tan and green clouds of sediment in the Tasman Sea on the west side of the island also point to the recent floods, which pushed extra water and mud into the Sea. The flooding began on February 13, when a series of unusual summer storms brought heavy rain and strong winds to the lower North Island. The floods damaged at least 19 bridges, affected water and sewer systems, and knocked out power and communications for several days.

It is no coincidence that the flood area is one of New Zealand’s primary crop-growing regions. Many previous floods have carried rich soil to the land, making the ground fertile crop land. This year, however, the floods destroyed crops and devastated cattle and sheep farmers. Since the flooding began, vegetable prices have increased more than 200 percent. As the waters recede, farmers are beginning to assess the damage, which is expected to soar up to 200 million dollars.

Floods and Landslides in New Zealand