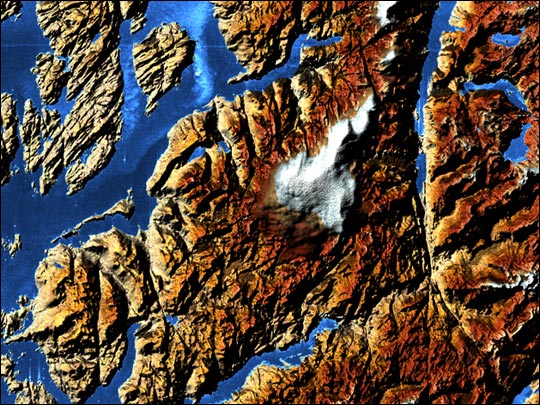 The Norwegian Fjords are steep, ice-carved valleys that stretch from the land out into the sea. Fjords are created not solely by glacier erosion, but also by the high-pressure melt water that flows beneath the ice. Fjord valleys can be carved hundreds to thousands of meters below sea level. The Hardangerfjorden shown in this image is about 179 km long, and reaches its maximum depth of more than 800 m about 100 km inland.

In the above image, based on elevation data collected by the Shuttle Radar Topography Mission (SRTM), beige and yellow represent low elevations, while red, brown and white represent progressively higher elevations. Shades of blue represent water. The Hardangerfjord is left of center, and extends off the top of the image. Sorfjorden is towards the right edge of the image.

The location of a fjord may be due to pre-glacial valleys, bedrock characteristics, or fractures in the Earth's crust. Fjords typically have U-shaped cross-sectional profiles, with the valley floor being flat or only slightly rounded. The fjord's longitudinal profile usually consists of a series of basins separated by rock barriers or moraine sills (glacial debris). Fjord entrances are usually quite shallow with shoals and small islands. Usually the deep basins are situated some distance inland from the mouth of the fjord. The shallow mouths are places where the glaciers that once filled the valley either began to float, or else had room to spread out. Inland, the glaciers were more confined, and so they carved more deeply into the Earth.

About 10,000 years ago, at the end of the last major glaciation, the Scandinavian land mass began slowly rising up as warmer temperatures freed it from the enormous weight of glacial ice, a process called glacial rebound. However, the land's increased buoyancy did not keep pace with the rising sea level, and the lower parts of formerly glaciated valleys became flooded. The glacial rebound of the Scandinavian land mass is still occurring.

Image courtesy German Remote Sensing Data Center, based on data from the SRTM.