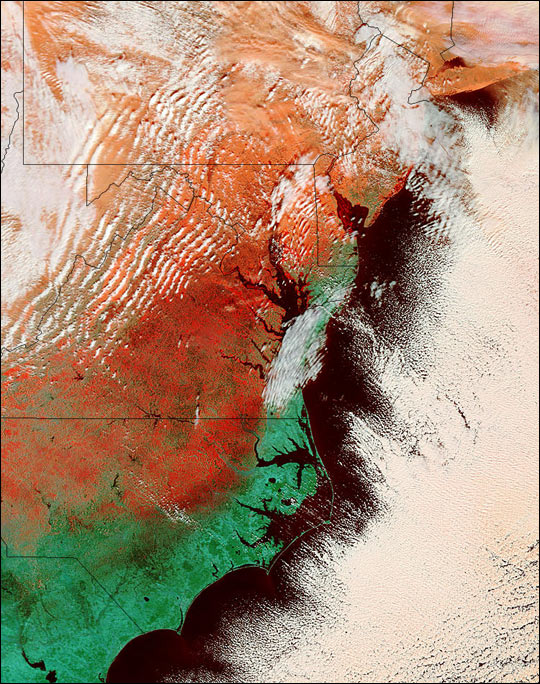 Severe winter storms across much of the eastern half of the United States slowed travelers, closed schools and businesses, and knocked out electricity. According to the National Weather Service, a major ice storm coated North Carolina, South Carolina, and Georgia with a thick layer of ice on January 27, 2004. Ice up to an inch thick prompted South Carolina Governor Mark Sanford to declare a state of emergency. Icy power lines resulted in power outages for about 338,000 customers throughout North and South Carolina and Georgia. The storm later moved into Virginia and Maryland, where ice glazed several inches of snow that fell the previous day. To the north, heavy snow began to fall on January 27, and continued to inundate the southern New England States on January 28, when this image was taken.

This false-color Moderate Resolution Imaging Spectroradiometer (MODIS) image shows ice and snow in shades of red and orange. Darker red areas are aligned with those areas that received ice storms. The lighter red and orange areas show where snow covers the ground. Ice in the clouds over Pennsylvania appears peach, while water clouds are white. Vegetation is bright green. Streaks of red in the Delaware and Chesapeake Bays show where ice has formed near the shore.