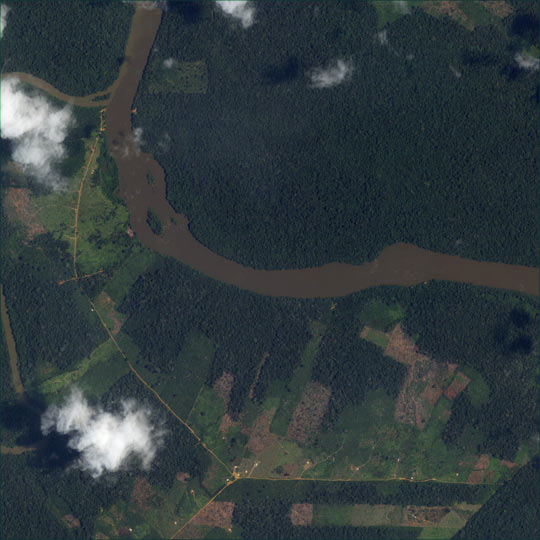 Throughout history, patterns of settlement have followed roads, rivers, and other lines of transportation. The frontiers of the 21st century are no exception. This high-resolution image of Amazonia shows farms cleared from the jungle spreading out on either side of a narrow dirt road. Above and to the right of the river that bisects the image is almost unbroken forest. The river, a tributary of the Amazon, is colored brown by the large amount of sediment it carries, possibly the result of deforestation upstream.

The image was acquired for the Large Scale Biosphere-Atmosphere Experiment in Amazonia (LBA) by the IKONOS satellite, which is owned and operated by Space Imaging Corporation. Centered near 10° south, 62° West, the image has a resolution of about 8 meters per pixel, reduced from IKONOS’ 4-meter maximum color resolution. The LBA is an intensive field campaign in which scientists are studying the environment of Amazonia, the role of Amazonia in global climate, and the effects of human-caused change in the region.

Image by Robert Simmon, based on IKONOS data provided by DigitalGlobe through the NASA Scientific Data Purchase, with help from Denelle Grant and Compton Tucker, NASA GSFC.