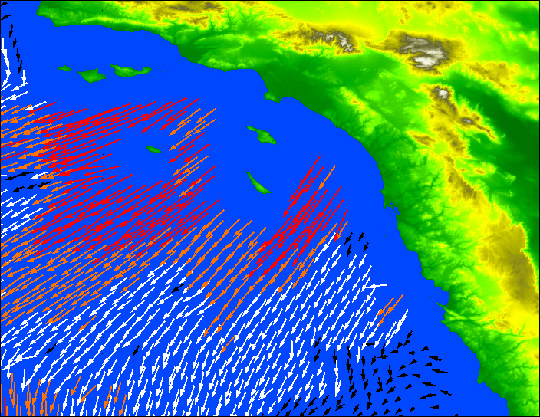 High-resolution data from NASA’s QuikScat satellite revealed the direction and intensity of the Santa Ana winds that have caused widespread fires and property damage throughout the Los Angeles Basin in the last two days. Santa Ana is an offshore and down-slope wind in Southern California that is usually channeled through mountain gaps.

Even after losing much of their strength over the ocean, the wind speed still exceeded 34 miles per hour. The wind speeds and directions are retrieved from range-compressed backscatter measured by the SeaWinds sensor aboard QuikScat. These Santa Ana winds extend more than 500 kilometers (310 miles) offshore before changing direction to flow along the shore.

Useful applications of high-resolution science-quality wind products derived from range-compressed backscatter have been demonstrated in two scientific papers: one on Hurricane Floyd and the other on Catalina Eddies. This is the first demonstration of a near-real-time application.

On January 6, 2002, Santa Ana winds blew dust from interior deserts and other dry areas out over California and the Pacific Ocean. This QuikScat image shows the direction and intensity of the winds.