The idea of mapping evapotranspiration with Landsat data was not new. In fact it was a problem scientists had been trying—mostly without success—to solve for two and half decades.

Landsat doesn’t measure water vapor directly, but evaporating and transpiring water takes energy, something Landsat does observe. If they knew how much energy was going into driving evapotranspiration, Morse and Allen could estimate how much water a particular field of crops had consumed on any particular day.

Energy—mostly solar energy—at the surface of the Earth can either heat the ground, heat the air, or be used in evapotranspiration. To find the amount of energy available to drive evapotranspiration, then, scientists knew they would have to simply subtract the energy used to heat the air and the ground from the total available energy. Landsat makes measurements of most of these pieces of the energy budget, so calculating the total energy is a relatively straightforward thing. 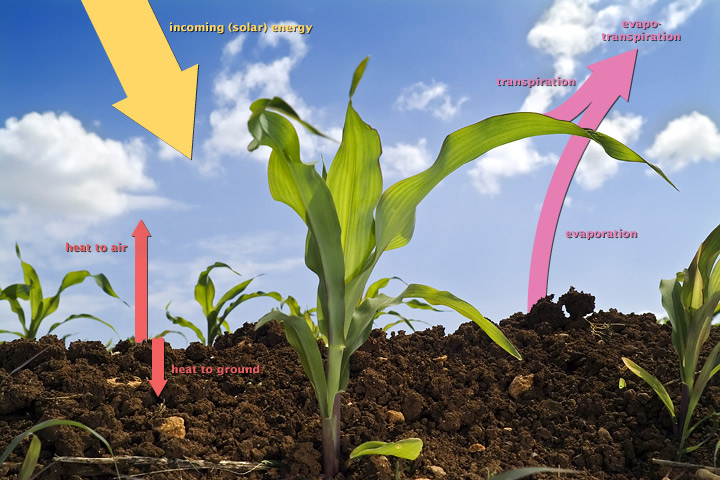 The amount of energy that heats the ground is also a straightforward calculation. It depends on how much heat is already in the ground and how much vegetation covers the ground, since plants shade the ground. Landsat measures both land surface temperature and vegetation, and those measurements can be used to figure out how much of the available energy is going into heating the ground.

Calculating the amount of energy used to heat the air posed a much bigger challenge. "That's the lion we have to tame," says Allen. The energy used to heat the air near the ground comes from the ground itself: it is the heat you feel rising from a parking lot or your car’s dashboard on a hot day. The transfer of energy between the ground and the air is driven by the temperature difference between them, something that changes as often as the land surface changes. It also depends on wind and the way it plays over Earth’s surface. "We cannot see wind [over land] from a satellite," says Allen.

"Twenty to twenty-five years ago, people at Goddard [Space Flight Center] and other places were working on this same problem. They were wanting to calculate evapotranspiration using surface energy balance using Landsat thermal data, and they concluded it could not be done," says Allen.