Orbiting satellites are now collecting data relevant to all aspects of the hydrologic cycle, including evaporation, transpiration, condensation, precipitation, and runoff. NASA even has one satellite, Aqua, named specifically for the information it is collecting about the many components of the water cycle. 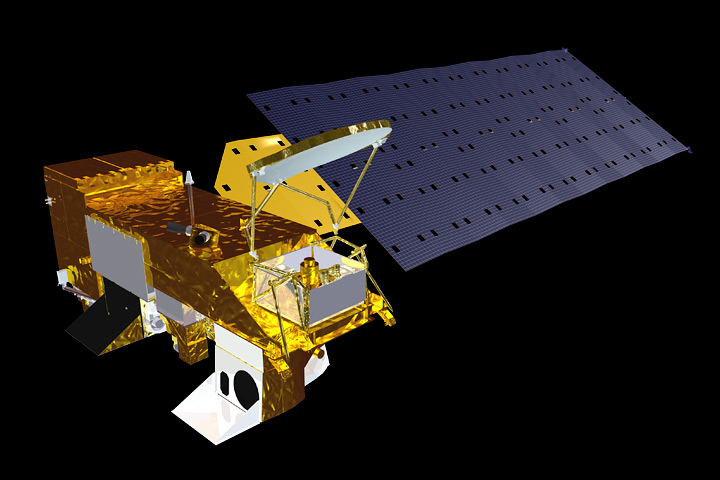 Since water vapor is the Earth’s primary greenhouse gas, and it contributes significantly to uncertainties in projections of future global warming, it is critical to understand how it varies in the Earth system. In the first years of the Aqua mission, AIRS, AMSU, and HSB provided space-based measurements of atmospheric temperature and water vapor that were more accurate than any obtained before; the sensors also made measurements from more altitudes than any previous sensor. The HSB is no longer operational, but the AIRS/AMSU system continues to provide high-quality atmospheric temperature and water vapor measurements.

Aqua’s AIRS and AMSU instruments measure relative humidity at multiple pressure levels, which correspond to altitude. Near the surface (100 kPa), the air above the ocean is almost saturated with water, while it is dry above Australia. It is generally drier higher in the atmosphere (60 kPa), except where convection lifts moisture aloft. At the lower edge of the stratosphere (10 kPa) the air is almost universally dry. (NASA maps by Robert Simmon, based on AIRS/AMSU data.)

More recent studies using AIRS data have demonstrated that most of the warming caused by carbon dioxide does not come directly from carbon dioxide, but rather from increased water vapor and other factors that amplify the initial warming. Other studies have shown improved estimation of the landfall of a hurricane in the Bay of Bengal by incorporating AIRS temperature measurements, and improved understanding of large-scale atmospheric patterns such as the Madden-Julian Oscillation.

In addition to their importance to our weather, clouds play a major role in regulating Earth’s climate system. MODIS, CERES, and AIRS all collect data relevant to the study of clouds. The cloud data include the height and area of clouds, the liquid water they contain, and the sizes of cloud droplets and ice particles. The size of cloud particles affects how they reflect and absorb incoming sunlight, and the reflectivity (albedo) of clouds plays a major role in Earth’s energy balance. 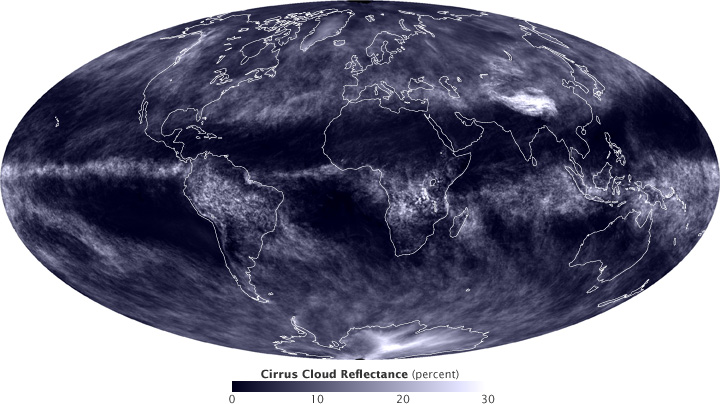 High, thin cirrus clouds reflect relatively little sunlight back into space compared to the amount reflected by thick cumulus clouds. This map shows the reflectivity of cirrus clouds [with a maximum of 30 percent (shown in white)] during March of 2010. (Map by Robert Simmon, using data from the MODIS Atmosphere Team.)

One of the many variables AMSR-E monitors is global precipitation. The sensor measures microwave energy, some of which passes through clouds, and so the sensor can detect the rainfall even under the clouds.

Water in the atmosphere is hardly the only focus of the Aqua mission. Among much else, AMSR-E and MODIS are being used to study sea ice. Sea ice is important to the Earth system not just as an important element in the habitat of polar bears, penguins, and some species of seals, but also because it can insulate the underlying liquid water against heat loss to the often frigid overlying polar atmosphere and because it reflects sunlight that would otherwise be available to warm the ocean.

When it comes to sea ice, AMSR-E and MODIS provide complementary information. AMSR-E doesn’t record as much detail about ice features as MODIS does, but it can distinguish ice versus open water even when it is cloudy. The AMSR-E measurements continue, with improved resolution and accuracy, a satellite record of changes in the extent of polar ice that extends back to the 1970s.

AMSR-E and MODIS also provide monitoring of snow coverage over land, another key indicator of climate change. As with sea ice, AMSR-E allows routine monitoring of the snow, irrespective of cloud cover, but with less spatial detail, while MODIS sees greater spatial detail, but only under cloud-free conditions.

As for liquid water on land, AMSR-E provides information about soil moisture, which is crucial for vegetation including agricultural crops. AMSR-E’s monitoring of soil moisture globally permits, for example, the early identification of signs of drought.