The water, or hydrologic, cycle describes the pilgrimage of water as water molecules make their way from the Earth’s surface to the atmosphere and back again, in some cases to below the surface. This gigantic system, powered by energy from the Sun, is a continuous exchange of moisture between the oceans, the atmosphere, and the land.

Earth’s water continuously moves through the atmosphere, into and out of the oceans, over the land surface, and underground. (Image courtesy NOAA National Weather Service Jetstream.)

Studies have revealed that evaporation—the process by which water changes from a liquid to a gas—from oceans, seas, and other bodies of water (lakes, rivers, streams) provides nearly 90% of the moisture in our atmosphere. Most of the remaining 10% found in the atmosphere is released by plants through transpiration. Plants take in water through their roots, then release it through small pores on the underside of their leaves. In addition, a very small portion of water vapor enters the atmosphere through sublimation, the process by which water changes directly from a solid (ice or snow) to a gas. The gradual shrinking of snow banks in cases when the temperature remains below freezing results from sublimation.

Together, evaporation, transpiration, and sublimation, plus volcanic emissions, account for almost all the water vapor in the atmosphere that isn’t inserted through human activities. While evaporation from the oceans is the primary vehicle for driving the surface-to-atmosphere portion of the hydrologic cycle, transpiration is also significant. For example, a cornfield 1 acre in size can transpire as much as 4,000 gallons of water every day.

After the water enters the lower atmosphere, rising air currents carry it upward, often high into the atmosphere, where the air is cooler. In the cool air, water vapor is more likely to condense from a gas to a liquid to form cloud droplets. Cloud droplets can grow and produce precipitation (including rain, snow, sleet, freezing rain, and hail), which is the primary mechanism for transporting water from the atmosphere back to the Earth’s surface.

When precipitation falls over the land surface, it follows various routes in its subsequent paths. Some of it evaporates, returning to the atmosphere; some seeps into the ground as soil moisture or groundwater; and some runs off into rivers and streams. Almost all of the water eventually flows into the oceans or other bodies of water, where the cycle continues. At different stages of the cycle, some of the water is intercepted by humans or other life forms for drinking, washing, irrigating, and a large variety of other uses.

The amount of water in the atmosphere at any moment in time is only 12,900 cubic kilometers, a minute fraction of Earth’s total water supply: if it were to completely rain out, atmospheric moisture would cover the Earth’s surface to a depth of only 2.5 centimeters. However, far more water—in fact, some 495,000 cubic kilometers of it—are cycled through the atmosphere every year. It is as if the entire amount of water in the air were removed and replenished nearly 40 times a year. 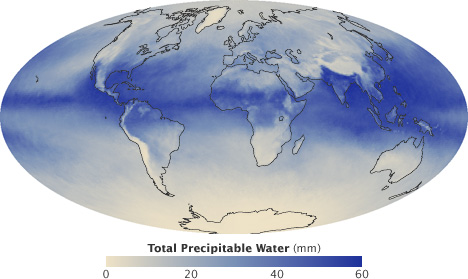 This map shows the distribution of water vapor throughout the depth of the atmosphere during August 2010. Even the wettest regions would form a layer of water only 60 millimeters deep if it were condensed at the surface. (NASA image by Robert Simmon, using AIRS & AMSU data.)

In the case of the oceans, the continual excess of evaporation versus precipitation would eventually leave the oceans empty if they were not being replenished by additional means. Not only are they being replenished, largely through runoff from the land areas, but over the past 100 years, they have been over-replenished: sea level around the globe has risen approximately 17 centimeters over the course of the twentieth century.

Sea level has been rising over the past century, partly due to thermal expansion of the ocean as it warms, and partly due to the melting of glaciers and ice caps. (Graph ©2010 Australian Commonwealth Scientific and Research Organization.)

Sea level has risen both because of warming of the oceans, causing water to expand and increase in volume, and because more water has been entering the ocean than the amount leaving it through evaporation or other means. A primary cause for increased mass of water entering the ocean is the calving or melting of land ice (ice sheets and glaciers). Sea ice is already in the ocean, so increases or decreases in the annual amount of sea ice do not significantly affect sea level.

Blackfoot (left) and Jackson (right) glaciers, both in the mountains of Glacier National Park, were joined along their margins in 1914, but have since retreated into separate alpine cirques. The melting of glacial ice is a major contributor to sea level rise. [Photographs by E. B. Stebinger, Glacier National Park archives (1911), and Lisa McKeon, USGS (2009).]

Throughout the hydrologic cycle, there are many paths that a water molecule might follow. Water at the bottom of Lake Superior may eventually rise into the atmosphere and fall as rain in Massachusetts. Runoff from the Massachusetts rain may drain into the Atlantic Ocean and circulate northeastward toward Iceland, destined to become part of a floe of sea ice, or, after evaporation to the atmosphere and precipitation as snow, part of a glacier.

Water molecules can take an immense variety of routes and branching trails that lead them again and again through the three phases of ice, liquid water, and water vapor. For instance, the water molecules that once fell 100 years ago as rain on your great- grandparents’ farmhouse in Iowa might now be falling as snow on your driveway in California.