Thick, choking smoke hung over Russia on August 1, 2010, adding to the misery of a stifling summer heat wave. Thousands of people were fleeing nearly 700 fires burning in the drought-dried forests and peat bogs of western Russia, while those not directly threatened were struggling to see through and breathe the smoky air.

It was perhaps not too surprising, then, when the Ozone Monitoring Instrument (OMI) on NASA’s Aura satellite recorded high concentrations of aerosols over far northern Russia on August 1. Smoke from forest fires contains tiny particles (aerosols) produced when a fire incompletely burns through trees and other carbon-based fuel. These aerosols usually linger in the lower part of the atmosphere before falling out. On this day, OMI measured aerosols above the top of high clouds.

A decade ago, a scientist trying to trace the source of those aerosols would have looked for an erupting volcano. A volcanic eruption, it was thought, was the only force powerful enough to loft aerosols twelve kilometers or more into the atmosphere.

But in 2010, meteorologist Michael Fromm saw another suspect far closer to northern Russia. Working at the Naval Research Laboratory in Washington, D.C., Fromm had spent the last decade studying how fires inject smoke into the upper atmosphere. His experience told him that at least one of the hundreds of fires burning in western Russia had probably generated a powerful, dangerous firestorm. 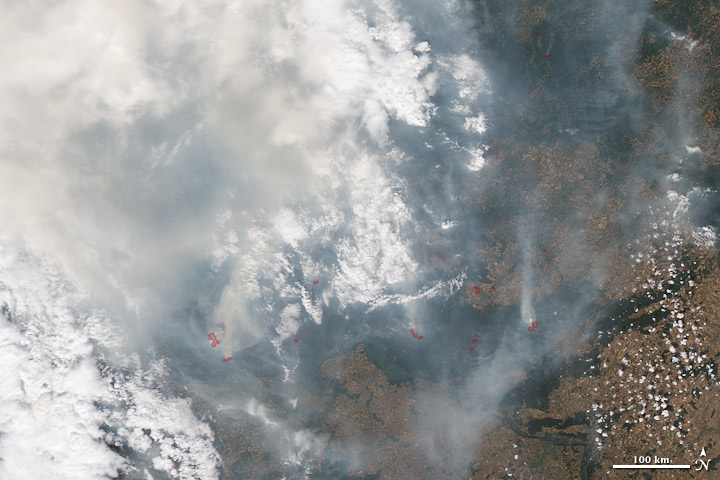 The high-altitude particles in OMI data could have been smoke from fires in Western Russia. The fires are outlined in red in this photo-like satellite image from July 30, 2010. Clouds indicate that air was rising and conditions were right for a firestorm to form. (NASA image by Jesse Allen using MODIS data.)

Large fires can create their own weather by rapidly heating the air above them. The heated air rises with smoke until water vapor in the air condenses into a puffy cloud. An odd-looking puff of white capping a dark column of smoke is the sign of a fire-formed, or pyrocumulus cloud.

Occasionally, if the superheated air rises fast and high enough, it forms a towering thundercloud. Like the thunderstorms that form on a hot summer’s day, the tops of these cauliflower-shaped clouds reach high enough into the atmosphere that ice crystals form. Those ice crystals electrify the cloud, creating lightning. Called pyrocumulonimbus clouds, the clouds are capable of dangerous lightning, hail, and strong winds. One such firestorm in 2003 pelted Canberra, Australia, with large, soot-darkened hail, produced a damaging tornado, and generated strong winds that caused the fire to explode into neighborhoods in the capital city. 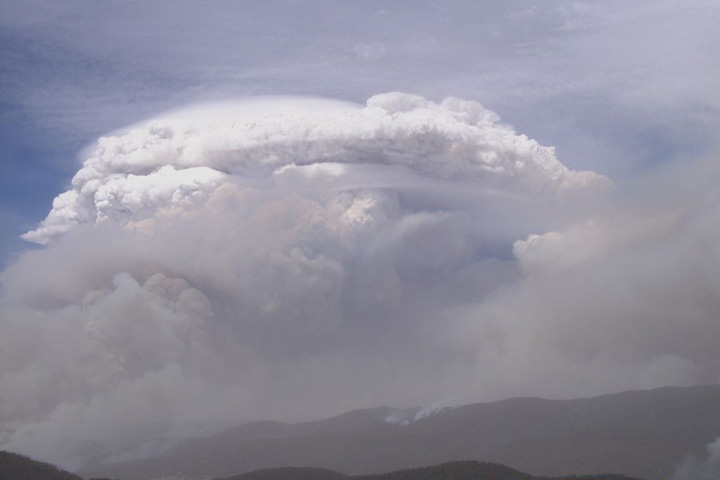 As dangerous and destructive as pyrocumulonimbus-driven storms can be, the giant clouds also act like a chimney, sucking smoke high into the atmosphere. After the Canberra fires, the Total Ozone Mapping Spectrometer (OMI’s predecessor) detected extremely high levels of aerosols in the atmosphere. NASA’s Stratospheric Aerosol and Gas Experiment (SAGE III ) satellite confirmed that the smoke from Canberra’s firestorm had reached the stratosphere.

Was OMI’s observation this summer an indicator that a similar firestorm had erupted in Russia? Fromm suspected that it was, and he set out to find proof of a pyrocumulonimbus cloud in other satellite data. 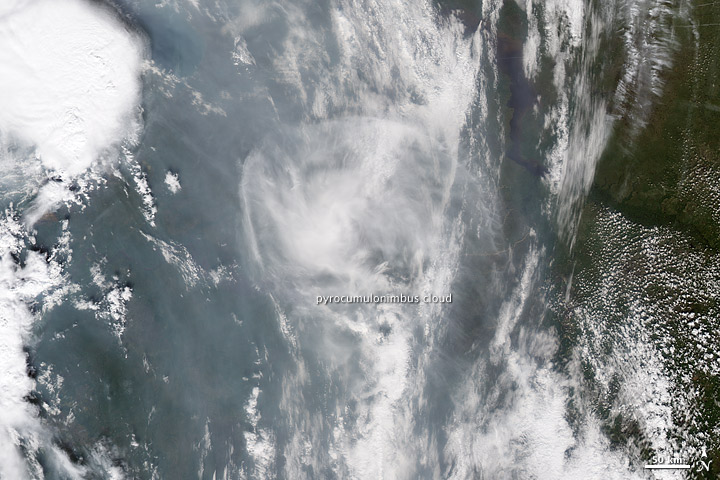