For a few glaciers, Casey was able to use “hyperspectral” data collected by Hyperion, an instrument on NASA’s Earth Observing-1 (EO-1) satellite that collects information in more than 200 discrete spectral wavelengths and offers a flood of detail. (Most other satellite spectrometers measure a few dozen at most.) Remote sensing scientists say it’s like standing in a home improvement store, asking for white paint, and having the clerk ask: “Do you want off-white, colonial white, antique white, or eggshell white?”

But Hyperion does have its drawbacks. It produces so much data that it can be difficult to interpret. And while some other instruments can see a large swath of Earth’s surface at once, Hyperion has a small field of view.

Still, the ability to detect electromagnetic radiation in so many discrete spectral bands meant Casey could get a very detailed view of the geochemistry of materials on the glaciers it flew over. She found, for instance, valuable observations from Lhotse Shar and Imja glaciers in Nepal, Whakapapa and Mangatoetoenui glaciers in New Zealand, and the Hofsjökull Ice Cap in Iceland.

“It has been incredibly satisfying to go into the field and collect spectral and physical samples, analyze debris samples for geochemical composition, and confirm geochemical results for what I’ve described with the satellite data,” said Casey. “By collecting field samples in several different glacial environments, I think I’ve been able to prove that satellites can actually do this kind of work.” 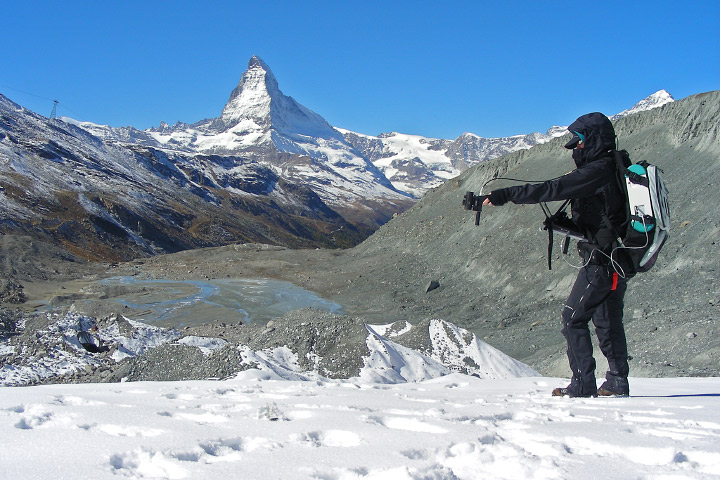 Kimberly Casey takes spectral measurements of clean snow on the Findelen Glacier, with the Matterhorn in the background. (Photograph ©2010 Kimberly Casey.)

Her next step is to develop methods to automate the debris-mapping process. So far, she has analyzed satellite images, one by one, with her own eyes. But she hopes to develop algorithms that get computers to do more of the work. She also plans to start working with colleagues at NASA Goddard to characterize particulate matter in the atmosphere immediately above glaciers, instead of focusing exclusively on particulates directly on the ice surface.

All of this should bring Casey closer to producing the global maps of glacial particulates that scientists need to start asking broader questions. Where are rates of particulate matter changing and why? What do those changes mean for the health of glaciers? And as the world grows warmer, how will the circulation of dust storms, wildfire smoke, salt spray, and other particulates affect the ice?

Plenty of challenges remain for Casey. ASTER, the most useful instrument for this type of mapping, is 13 years old and some of its most informative mid-infrared bands stopped working in 2008. NASA does not plan to launch a replacement, but the European Space Agency is planning to launch a satellite in 2014—Sentinel 2—that will have similar spectral capabilities. And NASA is in the early stages of developing the Hyperspectral Infrared Imager (HyspIRI), which would carry a sensor similar to Hyperion.

“The glaciers aren’t going to stop changing,” said Casey. “We need to continue looking at them with satellites so we can understand why.”