Ice in the Field

The obvious way to sort out which particulates are coating which glaciers—and how thick those layers are—is to put on some climbing boots and go up into the mountains and collect samples in person. Before she got involved in remote sensing research, Casey was trained as a geochemist, so she is comfortable peering at samples of particulates under a microscope. She is also comfortable climbing mountains. Over the last few years, she has done both. 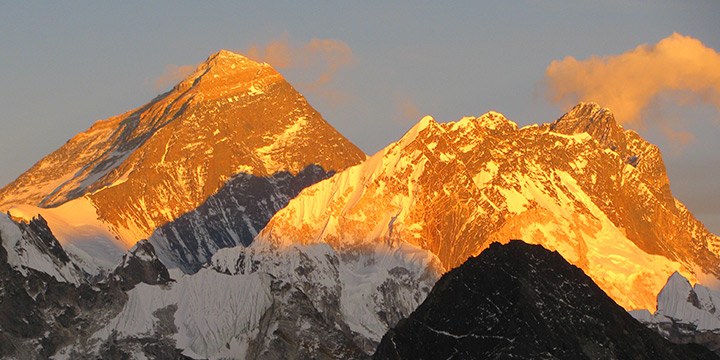 Mount Everest at sunset, from the summit of Gokyo Ri. (Photograph ©2009 Kimberly Casey.)

She has traveled to remote alpine glaciers in the Rockies, the Himalayas, the European Alps, New Zealand’s “Southern Alps,” Peru, Norway, Tanzania, and even to the Arctic archipelago of Svalbard. In collecting samples from all of those sites, Casey’s goal was to get a first-hand, detailed look—both visual and geochemical—at the particulates on the ground so she could compare them with what she sees in satellite observations.

In Nepal, Casey hauled sampling equipment on a two-month expedition that brought her 5,500 meters (18,000 feet) up into the Himalayas to examine Khumbu and Ngozumpa glaciers. Snow from Mount Everest feeds Khumbu, the world’s highest glacier. Ngozumpa is perched on Cho Oyu, the sixth tallest mountain in the world. These long tongues of ice are covered with thick debris because the extreme terrain frequently sends avalanches and rockfalls tumbling down on them. 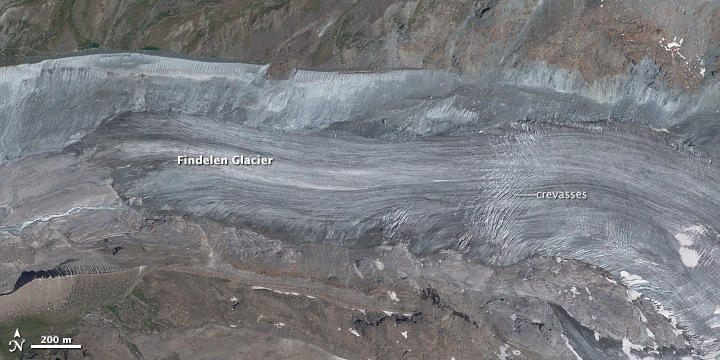 The Findelen Glacier (top) is relatively clean compared to the Zmutt Glacier (lower), which is almost completely obscured by debris. (Images based on GeoEye-1 data ©2009 Digital Globe.)

In New Zealand, she headed for Mount Ruapehu, the largest mountain on North Island. An active stratovolcano, Ruapehu frequently spits up ash clouds and sends muddy lahars sliding across the mountain’s eight small glaciers. In Switzerland, Casey sought the ice near the Matterhorn, where she sampled two valley glaciers—relatively clean Findelen and debris-covered Zmutt.

She has gone as far north as Spitsbergen, the largest island in the Norwegian archipelago of Svalbard. Just 1,000 kilometers (600 miles) from the North Pole, Spitsbergen is home to the northernmost permanent human settlement. It is also home to Grønfjordbreen and Aldegondabreen, two small glaciers on the western coast that receive heavy loads of salt from the sea and extensive coal particulates from nearby mines. 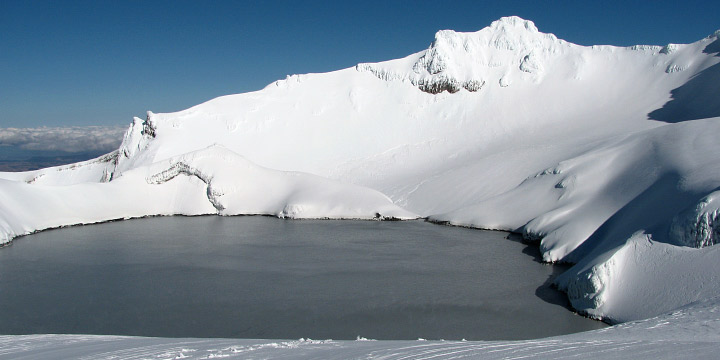 Though her goal was to collect data, Casey also found herself transfixed by the beauty of these rarely-seen landscapes. She took thousands of photographs, and those studies in ice have become a source of inspiration for her art. “In New Zealand, in particular, the combination of the volcanic emissions and the sulfur gas was surreal,” she said. “There’s a warm crater lake on Ruapehu with so much sulfur gas bubbling up that the nearby ice had an ethereal yellow sheen. It was like being on another planet.”