One feature that Casey knew satellites could observe is fairly straightforward: the color and brightness of debris layers on glaciers. The color of the surface has important consequences. Just as dark-colored clothes will make you warmer on a sunny day because they absorb sunlight, dark-toned particulates—such as soot from industrial pollution and wildfires, or basaltic tephra from volcanoes—heat glacial surfaces. Dark debris causes snow and ice to melt faster because it absorbs sunlight more readily than lighter-colored materials like salt and silica-rich dust.

The reflectivity of a substance is known as its albedo. Bright surfaces have high albedos (close to 1), while dark surfaces have low albedos (close to 0). Pure snow generally has a visible albedo of .95, meaning it reflects more than 95 percent of the visible light that hits it. Desert sand reflects about 40 percent (albedo of 0.4), and pure soot reflects less than ten percent of incoming light (albedo 0.1) 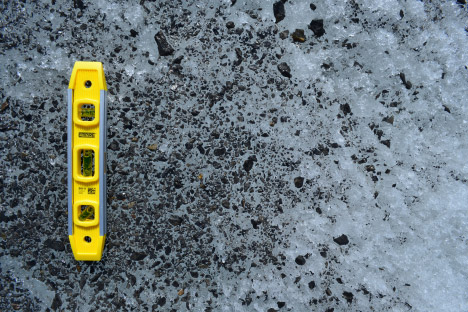 Small amounts of soot can have a big impact on albedo. As far back as 1980, scientist Warren Wiscombe (then at the National Center for Atmospheric Research, today at NASA) showed that just a few parts per billion of soot could reduce the albedo of snow by up to 15 percent. Leading climatologists, including former NASA scientist James Hansen, have argued that sooty smoke and industrial pollution from South Asia is one of the main factors to cause Tibetan glaciers to recede so rapidly during the past decade.

The composition of the debris on glacial surfaces also matters. Salts, for instance, dissolve into melt water on a glacier. Mixtures of soot, dust, pollen, and pulverized rock also make pockmarked, circular cavities in ice called cryoconites. These holes—which can grow to be meters deep—often fill with melt water that supports thriving colonies of cyanobacteria, fungi, and other microbes. The spread of these communities can even affect albedo as they spread over ice surfaces. 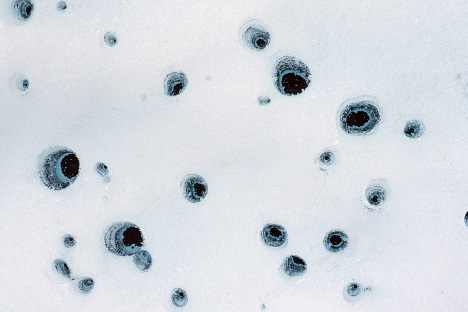 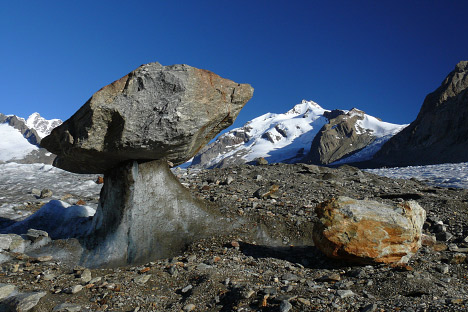 Some types of surface debris can hasten melting, forming pits in glacial ice through chemical melting or by absorbing heat from bright sunlight. Other types insulate the ice beneath. In some cases a large boulder will protect the ice beneath it as nearby ice melts, forming a glacier table. (Photographs ©2012 Kimberly Casey (top) and ©2010 Florian Mair (lower).)

Over time, cryoconite depressions can evolve into larger “suncups” and eventually into even larger, pipe-like depressions (moulins) that serve as conduits for liquid water. The water can cut deep into the ice, reaching the area where ice meets bedrock and changing how quickly the glacier flows.

The thickness of debris is also critical. While thin layers of dark particulates tend to heat the glacier surface and increase the rate of melting, thicker layers of debris can have the opposite effect. For instance, rocks, ash, and dirt from landslides or volcanic eruptions can behave like a blanket, insulating ice from changing air temperatures.