Twice-daily images of the Gulf of Mexico are available from the MODIS Rapid Response Team. The images in our Gulf Oil Spill gallery include annotation and interpretation.

On April 20, 2010, a deadly explosion at the Deepwater Horizon offshore drilling platform started a catastrophic oil leak into the waters of the Gulf of Mexico. NASA’s imaging satellites captured pictures of the Gulf the next day, showing a plume of smoke spreading eastward from the still-smoldering rig. 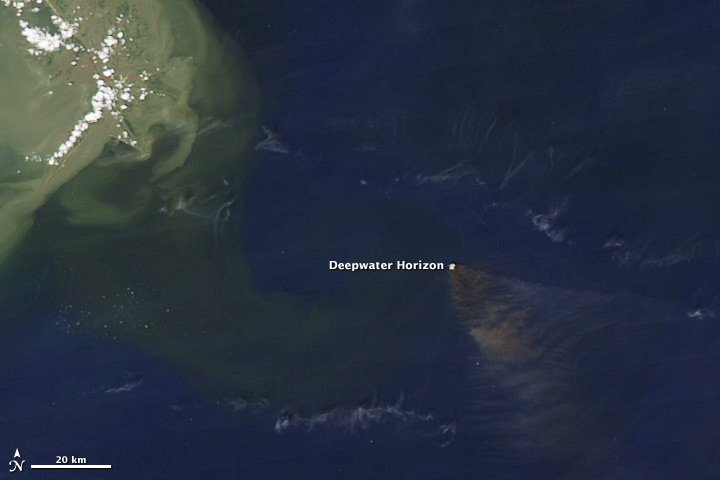 After several cloudy days, the first image showing significant oil on the surface was captured on the afternoon of April 25 by the Aqua satellite. By the time Aqua’s sister satellite, Terra, flew overhead the next morning, however, the oil was no longer visible—even though it was still there. 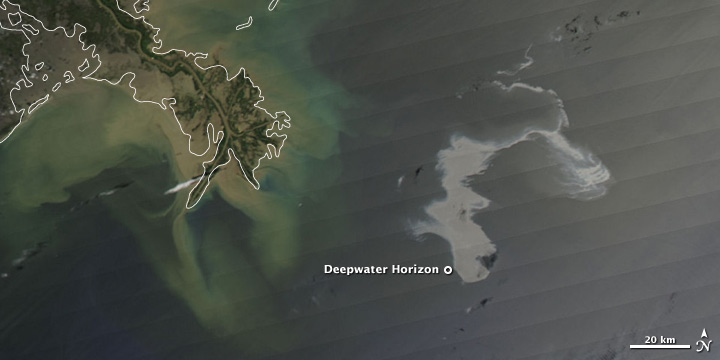 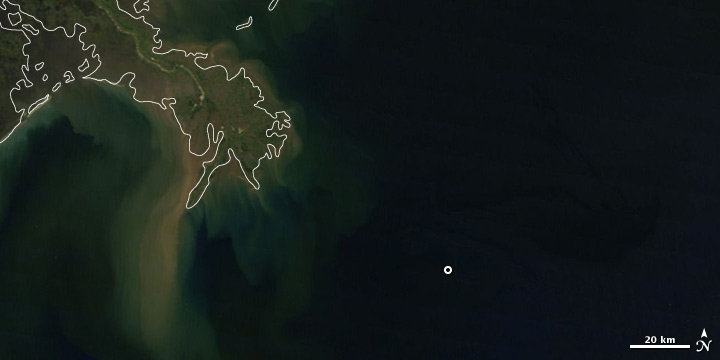 By April 25, 2010 (top), a spreading oil slick was visible off the coast of Louisiana. On the morning of the 26th (bottom), the slick appeared to disappear, but this was due to changes in lighting conditions, not the absence of oil. (NASA images courtesy MODIS Rapid Response Team.)

That hit and miss pattern has repeated itself often in the four months the leak has continued, and we’ve put together this FAQ to explain why we don’t post new oil slick images every day.

But unlike weather satellites that look at the same region on Earth 24 hours a day, Terra and Aqua generally only get one daylight view each of the Gulf of Mexico. Terra’s view is shortly before noon each day, and Aqua’s is shortly after. The view may be cloudy or hazy, and if the oil slick location is near the edge of the image, it will be blurry. 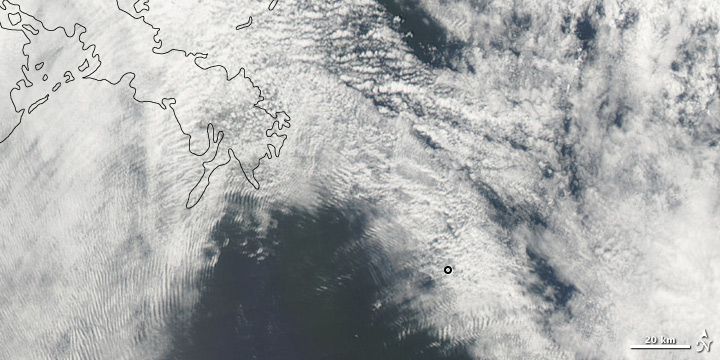 Clouds often obscure the oil slick in the humid Gulf (top, April 30), and sometimes the slick is near the edge of the satellites’ field of view (bottom, May 8). (NASA images courtesy MODIS Rapid Response Team.)

Even on a clear day, an oil slick may be imperceptible in photo-like satellite images. Like cooking oil added to a pot of water, a stream of crude oil disperses across the ocean surface into droplets and thin streamers. Against the already dark backdrop of the open ocean, the oil may not be detectable unless it is very thick or it is located in the part of the satellite image affected by sunglint.

The sunglint area is a bright strip that runs roughly north-south through satellite pictures of the ocean. It is caused by the mirror-like reflection of the Sun off the water; in sunglint regions, the ocean surface is reflecting a lot of light back to the satellite at the same angle at which the light hit the ocean. 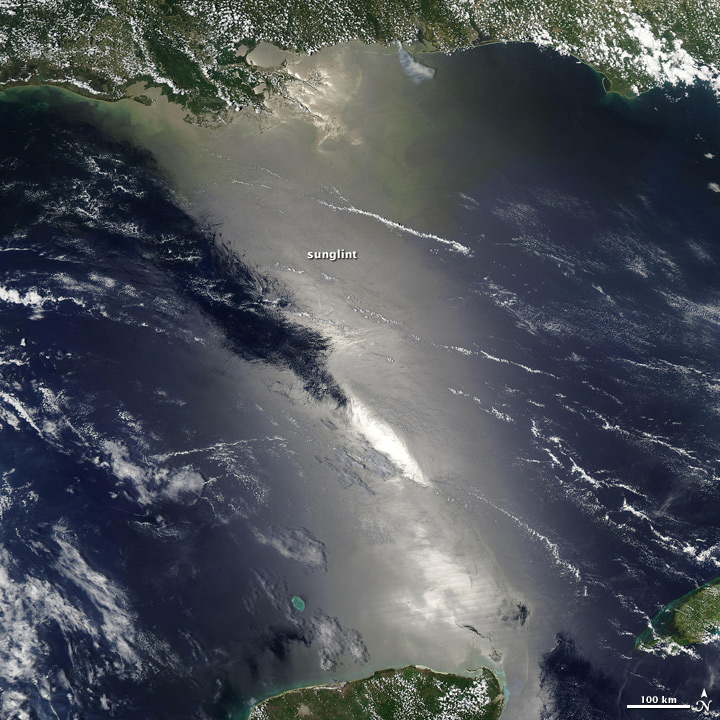 If the water were as smooth as a mirror, a line of perfect reflections of the Sun would appear in images such as this. Instead, small waves and ripples blur the reflection into a wide, bright strip—the sunglint region. This image was captured in 2009, before the Gulf oil leak. (NASA image courtesy MODIS Rapid Response Team.)

Most of the images of the oil slick that the Earth Observatory has published come from a sensor called MODIS, a copy of which flies on both the Terra and Aqua satellites. If the ocean were as smooth as a mirror, a sequence of nearly perfect reflections of the Sun, each with a width between 6-9 kilometers, would appear in the water in a line along the track of the satellite’s orbit.

Because the ocean is never perfectly smooth or calm, however, the Sun’s reflection gets blurred. Incoming sunlight is scattered in all directions by waves. The Sun’s perfect reflection gets spread out across wider strip of the ocean, which looks washed-out compared to adjacent ocean areas.

Why is oil visible in sunglint?

Oil smoothes the surface of the water, dampening small waves and ripples. This smoothing changes the way the ocean reflects sunlight; in a sense, it makes the water a better mirror.

Rough water blurs the Sun’s reflection by reflecting and scattering light in many directions (left). Oil smoothes the water surface, making it a better mirror: more sunlight is reflected back to the observer (the satellite) at the same angle as the incoming sunlight (right). If the oil is located near where the Sun’s reflection would appear in the image, the mirror-like reflection makes the oil-covered water look brighter than clean water. (NASA image by Robert Simmon.)

If the oil is located very close to the spot where the Sun’s reflection would appear, it usually looks brighter than nearby clean water in the MODIS images we routinely publish. However, if the oil is within the sunglint area but farther away from the precise spot where the Sun’s reflection would be, the oil-covered areas may look darker than the surrounding clearer water. Very thick oil may be visible outside of the sunglint region.

How do you know what is oil and what isn’t?

Leaked, manmade oil is not the only thing that can cause variations in the brightness of the Sun’s reflection off the ocean. When a leak is known to have occurred and has been observed through other means, it is easier to conclude that variations in brightness within the sunglint region are oil, especially in the open ocean.

Coastal environments are especially challenging because sediment, river runoff full of organic matter, and complex currents, can also change the reflection in the sunglint area. In these situations, you have to be more cautious about concluding a feature is manmade oil. 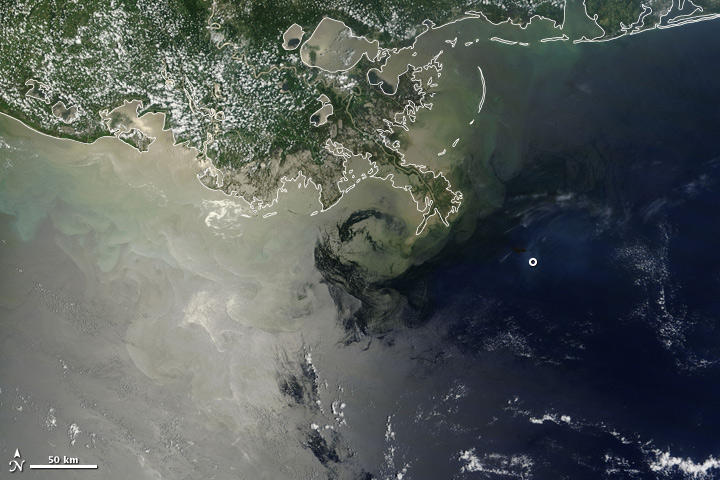 Muddy water, naturally occurring plant oils and organic debris, and complex current patterns make it difficult to identify oil slicks in photo-like images. Some of the bright streaks in this July 9 image are oil, but others may not be. (NASA image courtesy MODIS Rapid Response Team.)

Although MODIS satellite images cover the entire Gulf of Mexico every day, they have their limitations in observing surface oil slicks, which is why scientists and disaster responders are using a combination of photo-like satellite images, radar images, aerial photos, and observations from boats and the shore to document the size and spread of the Gulf of Mexico oil leak.