For CSIRO scientist Catia Domingues and her colleagues, being able to show that climate simulations and observations were in better agreement than they previously seemed was only the first payoff of the corrections to the XBT data. The second was that they used the revised data to balance the sea level budget for 1961-2003. 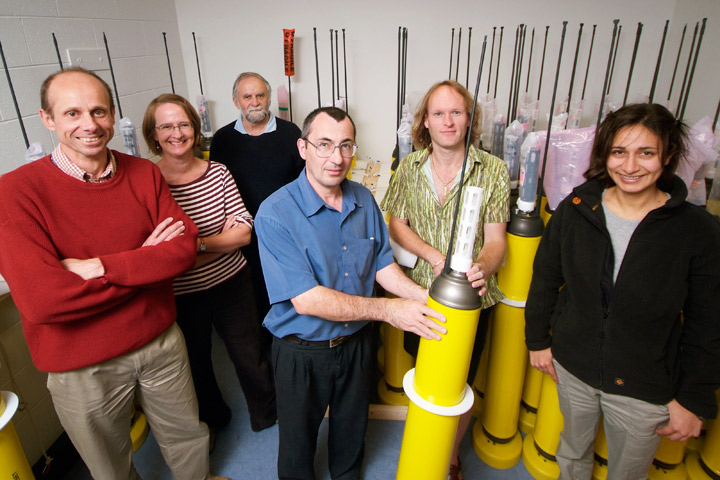 “When scientists added these terms, the sum was always less than the observed sea level rise measured by tide gauges and satellite altimeters. It’s like one plus one did not equal two,” says Domingues.

Rising sea level is one of the most serious consequences of global warming. In the past 50 years, sea level rose about 1.8 (plus or minus 0.3) millimeters a year. Satellite observations since 1993 indicate the pace has accelerated to about 3 millimeters per year. What’s driving the acceleration? How much and how fast will sea level rise in the future? In trying to answer these questions, scientists repeatedly tried to balance the sea level budget, and they repeatedly came up short.

In principle, it should be possible to add up each of the individual components of sea level rise—melting continental ice sheets in Antarctica and Greenland, retreating glaciers, the thermal expansion of near-surface water, thermal expansion of the deep ocean, and changes in water storage on land—to calculate the total rise over time. Unfortunately, early attempts to balance the sea level budget never added up. Each line on this graph shows how many millimeters each process added to or subtracted from total sea level since the early 1960s. (Graph adapted from Domingues 2008.)

“Susan Wijffels and her colleagues from here at CSIRO, along with Josh Willis, provided a way to correct the XBT data, and so we took those corrections and made the first revised estimates of sea level rise due to ocean warming for the period 1961 to 2003. What we found was that ocean heating was larger than scientists previously thought, and so the contribution of thermal expansion to sea level rise was actually 50 percent larger than previous estimates.”

It seems that the main reason the sea level budget between 1961 and 2003 would not add up before is that scientists were underestimating just how much warming and expanding the ocean was experiencing. But what about more recent changes in sea level?

“In this analysis, we focused on 1961-2003 because it is the time period highlighted as being an important, unresolved issue in the last IPCC report [Intergovernmental Panel on Climate Change Fourth Assessment Report],” said Domingues, “but also because the problems with the newest Argo data—the problems that Josh Willis found as well as other problems we have identified—haven’t been totally solved. For the most recent years [2003-2007], the sea level budget once again does not close. Our team is still working on that problem.”

The corrected XBT data resolved much of the discrepancy between calculated and observed sea level rise by increasing the amount of change contributed by thermal expansion. Now, the combined effects of melting ice, thermal expansion, and terrestrial storage (blue line) match measurements from tide gauges (red line) and satellite (black line) more closely—at least until the late 1990s. The shading around each line shows the range of uncertainty in the estimates; the actual value for the year may fall anywhere within the shaded area. (Graph adapted from Domingues 2008.)

They are also exploring how volcanic eruptions influence ocean heating, and whether a better understanding of how volcanoes influence the energy balance of the ocean will help explain short-term variability in ocean warming and cooling.

“One thing we found was that climate models that do not include volcanic forcing tend to overestimate the long-term change, and their simulated decadal variability is not in agreement with the observations. On the other hand, the models that include volcanic forcing are more realistic in terms of decadal variability, but they tend to slightly underestimate the long-term warming,” she says. “This kind of result tells us volcanic forcing is important, but that we don’t totally understand it yet.”

We need it all

If there is a moral to this story, it’s that when it comes to understanding the climate system, it’s hard to imagine too much redundancy. Every scientist involved in these studies says the same thing: to understand and predict our climate and how it is going to change, we need it all.

We need multiple, independent, overlapping sets of observations of climate processes from space and from the Earth’s surface so that we can create long-term climate records—and have confidence that they are accurate. We need theories about how the parts of the Earth system are related to each other so that we can make sense of observations. And we need models to help us see into the future.

“Models are not perfect,” says Syd Levitus. “Data are not perfect. Theory isn’t perfect. We shouldn’t expect them to be. It’s the combination of models, data, and theory that lead to improvements in our science, in our understanding of phenomena.”